One Page 40k: Breakthrough in the Ash Wastes

Last week the Majestic Gamers gathered at my place for another go at One Page 40k (1P40K). Unlike our previous game, which was a learning session and didn’t have much in the way of balance or parity, this time we all brought actual armies built using the rosters in the rulebook, kitted out and ready to slaughter their enemies.

We had five players, but Jim had extra models and was able to expand his Imperial Guard to allow for a 3-vs-2 game pitting two Imperial Guard players versus a strange alliance of Orks, Chaos Space Marines and Tau.

The battle was a baptism by fire for Jimbo’s newest Ork vehicle — a spectacular kitbashed battlewagon created from a Sherman tank scale model. Feast your eyes on this. 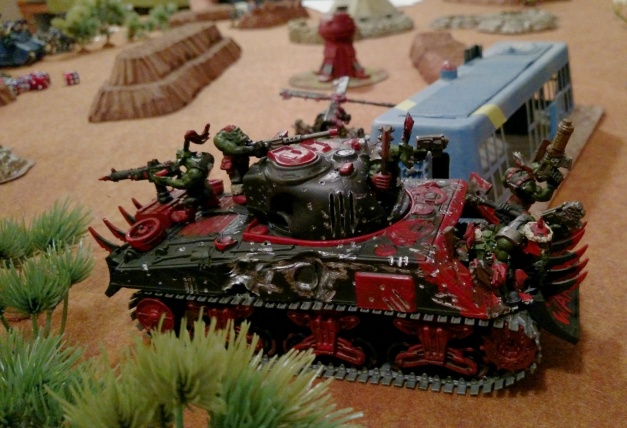 We played a breakthrough scenario, which awarded victory to the side that managed to get the most points’ worth of models into the enemy’s deployment area. This meant both sides would have to stay fairly mobile — even the Imperial Guard, which is better at digging in and awaiting the enemy with lots of gun barrels pointed at them!

Here’s a look at Jim’s fantastic, beautifully painted Imperial Guard motorized company. That’s two Leman Russ tanks in the foreground, a Basilisk on the right with a fully armored crew compartment, and a Chimera in the back. 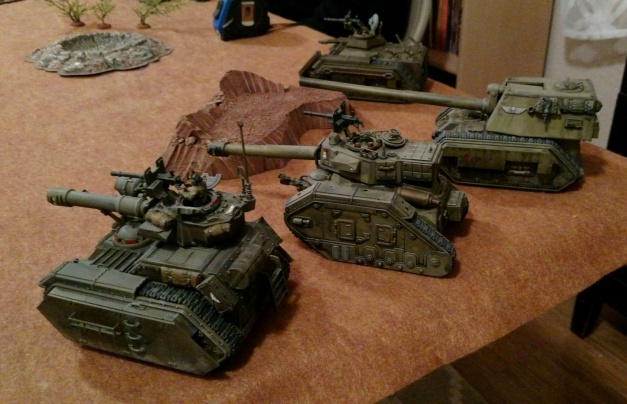 And here’s a look at the other Imperial Guard force, played by Ben using models from yours truly. The tank and most of the figures are from Pig Iron Productions. The green-suited guys on the left are from Lead Adventure Miniatures’ post-apocalyptic line, standing in as seasoned veterans for this Imperial Guard detachment. 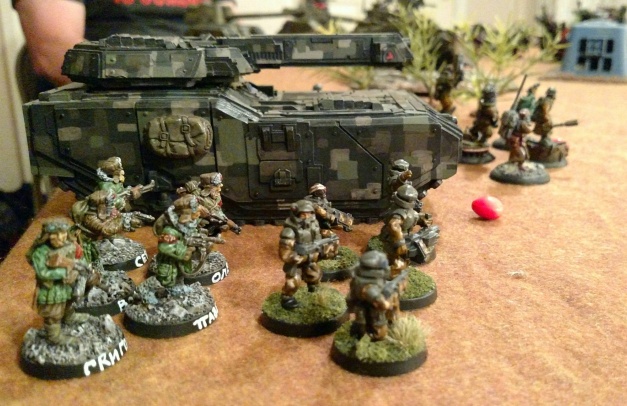 The game opened up with a series of advances by both sides. My Chaos marines rumbled forward in their Rhino, attracting the attention of Jim’s tanks. Their chose target, however, proved to be Paul’s Tau Pathfinders. Everyone was duly frightened of their marker lights (which grant bonuses for other Tau units). They were lucky to survive a barrage from Jim’s tank cannon! 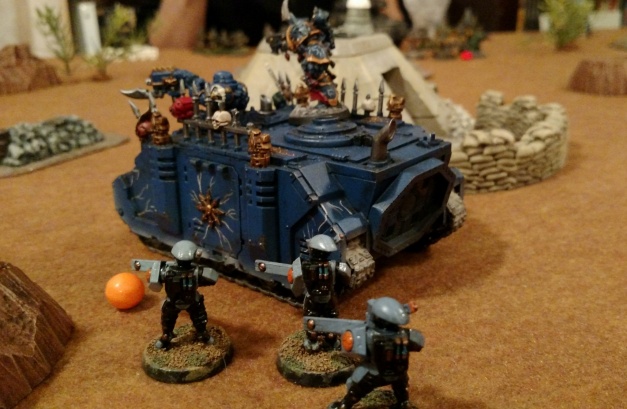 Jimbo’s Orks lurched forward on their rumbling battlewagon. Not only was the vehicle massive, but its payload was equally impressive! There were, I believe, 30 Orks (3 squads of 10) deployed aboard the battlewagon at the outset of the game. Yes, we made plenty of clown car jokes as Jimbo motored his dudes across the battlefield.

But then when he got within charge range of the enemy tanks … this happened. 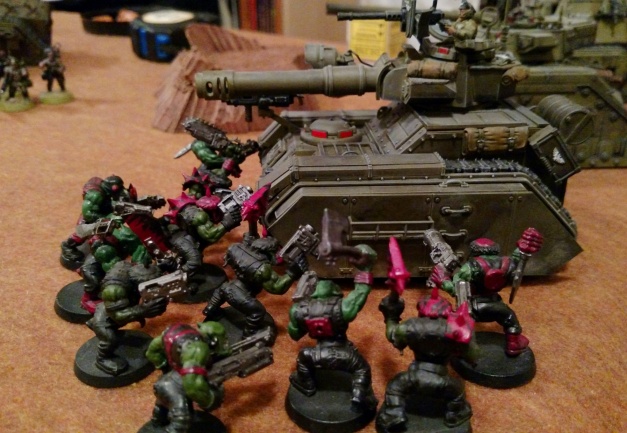 Yes, it was tremendous. Many dice were rolled. But the tank was still intact (battered, but still whole!) at the end of the first combat. The right flank (where most of Jim’s tanks were arrayed) turned into a grudge match between him and Jimbo, as the latter presented as many targets as he possibly could (in the form of howling Ork mobs) while the former agonized over whether to just annihilate the advancing Orks — or to hit the gas and start moving toward the opposing deployment zone (and victory). 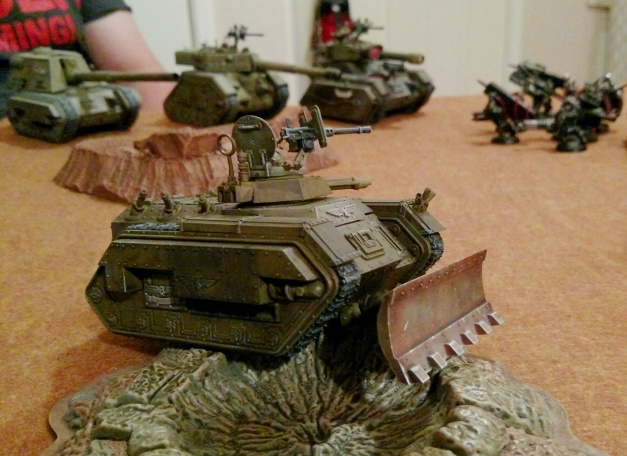 Soon thereafter, a lucky shot popped my Chaos Rhino, causing the 4 surviving squad members to pile out in a hurry. You can see Ben’s Imperial Guard advancing through a crater field in the background of this pic. 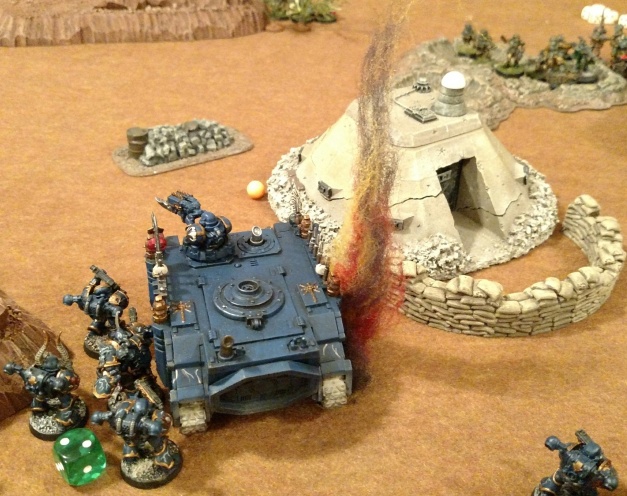 Meanwhile Orks continued to pour forth from Jimbo’s clown car/battlewagon. The last to disembark was his warboss, who promptly charged into the nearest squad of Guardsmen. 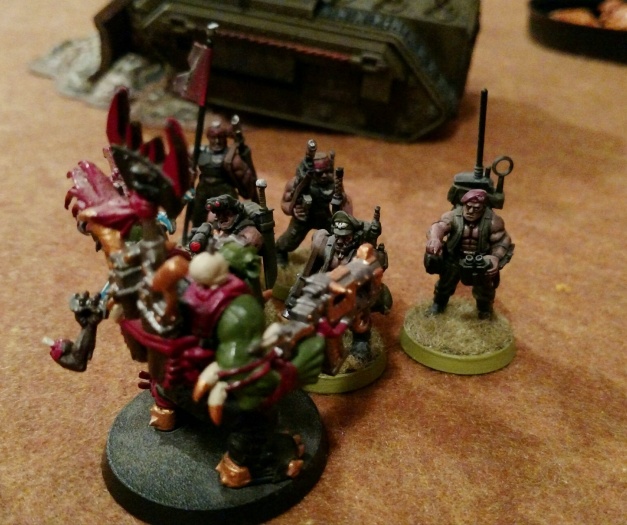 But unlike in regular 40k, 1P40K doesn’t let units get “stuck in” to close combat. At the end of each melee, if one side wasn’t annihilated, the combatants separate. This is critical because either unit can now be targeted by gunfire. So Jimbo’s warboss had his way with this squad of hapless Guardsmen … and then he took a tank salvo directly to his head. Oops!

Across the battlefield, Paul’s Tau had  been surgically excising various threats using their advanced weaponry and targeting systems. On the second turn, Paul was able to call in his Tau Crisis Suits via deep strike, landing them in the enemy’s rear and laying waste to several squads of infantry. 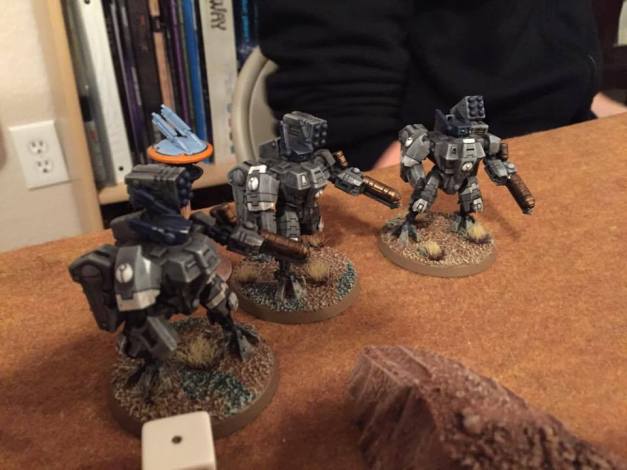 With armored targets approaching fast, my Helbrute climbed atop a small ridge in the center of the table and proceeded to open fire with his multi-melta. 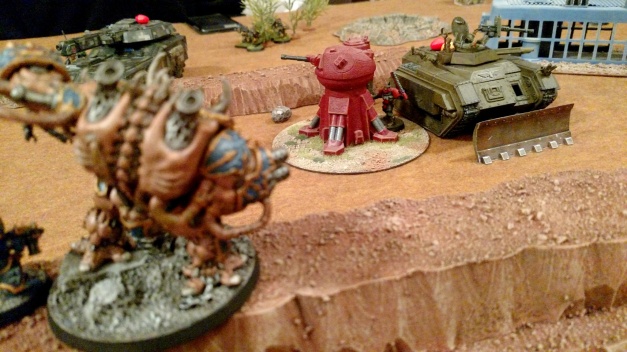 The laser cannon turret was actually part of the scenario … if a squad could get in base contact with it, they’d have a chance at at activating it and putting its destructive capability to use. Jim’s Guardsmen arrived and were able to activate the turret, but they were picked off in the process.

Ben’s tank arrived in the vicinity, and my Helbrute started to feel a little … exposed … on top of that ridge. Luckily, Paul’s Tau turned their attention to the tank, and in short order this was the result. 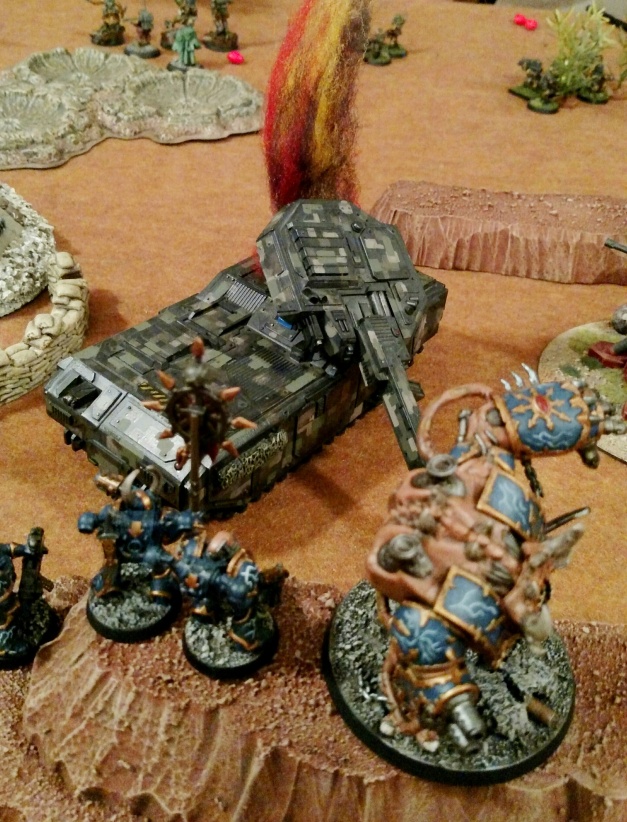 Anyway, here’s my last photo from the game. Tanks burning, a lone Chaos warrior lifting his sword to praise the dark gods … you know, just another Friday. 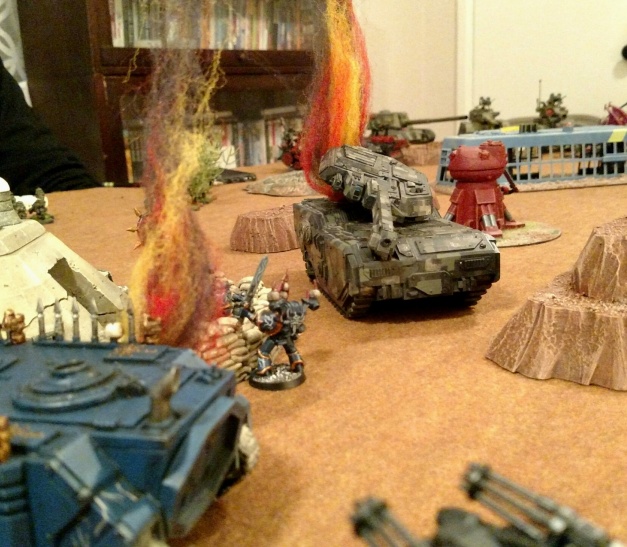 The game ended with lots of laughs, as Jimbo’s battlewagon (still alive!) careened into the enemy’s deployment zone, shrugged off several blasts from the huge tanks … and died to a piddly rifle shot from an Imperial Guardsman!

The bad guys managed to squeak out a win because my daemon prince was in the enemy’s deployment zone at the end of the last turn. Despite a few close calls, the other side wasn’t able to reach our deployment zone, and so we won.

Once again, 1P40K gave us a great game. Seriously, this ruleset is everything I want from 40k — simply and concise, yet still comprehensive and suitably fiddly (for players who want to customize their figures and try out different gear options). The army lists cover just about everything you’d ever need, and the advanced rules add in a bit more complexity if you’re missing that sort of thing.

I had a fairly productive half of 2016 painting up my Night Lords and knocking out a few smaller projects. I’m looking forward to lots more painting and modeling, because 1P40K is definitely gathering steam here in Oregon.

2 comments on “One Page 40k: Breakthrough in the Ash Wastes”