We got in our first proper game of Warhammer 40,000 last weekend, and it was a doozy — both in terms of the game itself, as well as the ramifications for the Caluphel storyline.

The Story So Far…

The game took place immediately after the events in the Archeotech Catacombs. The Tau had withdrawn from the tunnels, having paid a horrific price for whatever ancient secrets they retrieved, and had linked up with the Imperial defenders who were at that very moment fortifying Outpost Omicron against further attack.

Thus a cautious alliance was struck between the Tau and the Imperials (a platoon of Guardsmen along with a few squads of Salamanders Space Marines). And not a moment too soon, as both factions knew that doom was about to come boiling up out of the silent tunnels.

The Tyranids, long dormant in the archeotech catacombs, had been unleashed on Outpost Omicron. A desperate last stand by the defenders might slow them down and allow scouts to alert the rest of the disparate Imperial factions on the planet’s surface…

In game terms, we were playing a meatgrinder scenario with roughly 50 Power Level per side. That didn’t leave the Imperial Guard with enough points to take a lot of tanks, but that’s OK as this was primarily a learning game so we could put 8th edition through its paces.

The Tau, however, brought some heavy support in the form of Paul’s newly painted Riptide. As you can see from the photos, this thing is enormous! It was hard to get it in the frame and maintain the battlefield illusion (no one wants to see my curtains or bookshelf when imagining the grim darkness of the far future).

In any case, Paul had worked hard for many weeks on this beauty, and dammit, we were going to get it onto the battlefield one way or another!

And with that, we were off. Our goal here was to play a “proper” game of 40k. We had rulebooks, indices, tape measures and dice … lots and lots of dice. Here’s a look at the swarm… 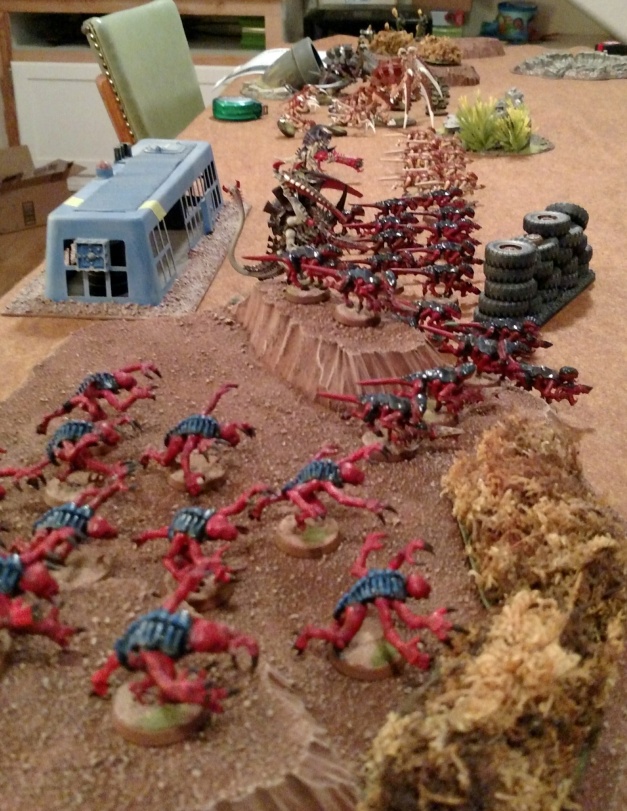 The meatgrinder scenario included one very important rule: attacking Tyranid squads that were destroyed had the ability to “respawn” back in the Tyranid deployment area, thus approximating an “endless wave” assault by the foul xenos.

Paul and I (playing the Tyranids) enjoyed this rule immensely, as it allowed us to shrug off the massive losses that our bugs suffered as they raced across the battlefield. “Don’t worry, they’ll be back,” was a common refrain as we removed handfuls of gaunts and genestealers.

Anyway, the Tyranids took the first turn, with most squads advancing forward. We found very little in the 40k rulebook that addressed terrain and movement penalties. In a way, that’s OK — after all, the movement rates for various units can be easily understood as being a “tactical” move distance that accounts for cautious movement through terrain and such. But we sort of expected various detailed terrain penalties, given that they are quite common in other wargames.

The bugs got off a few shots, as well as a psychic power or two (leaving the Imperials to bemoan their lack of psychic support). Then the Imperials and Tau answered with their own fusillade of firepower. Tyranids were cut down in their dozens, but I just gleefully quipped “They’ll be back” as I scooped them up from the tabletop.

I didn’t get many turn-by-turn photos, so here’s how it all went down. The right flank of the Tyranids crashed into a section of the defensive line held by the Salamanders, and quickly swarmed the few green-armored defenders. 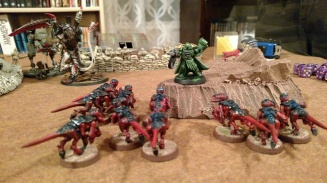 Even as the Space Marines went down, the Imperial Guardsmen behind sandbagged defensive lines peppered the attackers with lasgun and heavy weapon fire. But the Tyranids were too many in number, and the right flank folded and then collapsed.

This skirmish in particular looked rather one-sided, as a Carnifex scaled a watchtower and dealt with the scout squad on top.

Across the table, the Tau shored up the left flank with hyper-accurate gunfire from their Fire Warriors and a veritable firestorm of death from the Riptide. The Tyranid players quickly adjusted and sent both Carnifexes to deal with the Riptide, but both were killed before they could reach the lumbering battlesuit. But … they’ll be back. 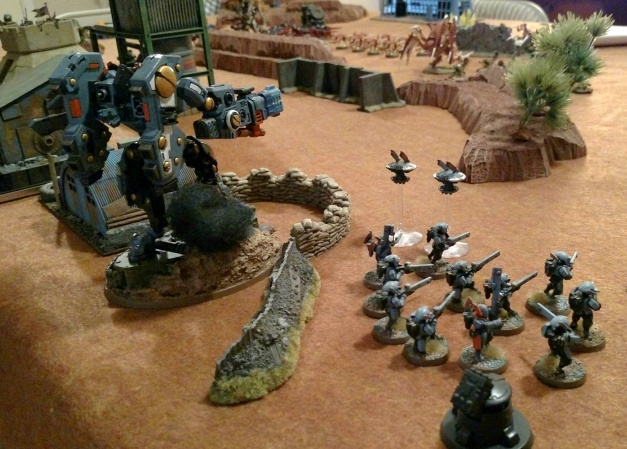 By that point, most of the Tyranids’ left flank had been eviscerated by the Tau. In a series of spectacular dice rolls, virtually all of the attackers respawned in the Tyranid deployment zone and began the grim march forward once again. The second wave was approaching…

At this point we realized why the meatgrinder scenario allowed the defender to win by having even one unit left alive at the end of the game. The sense of inevitability surrounding the respawn rules meant that the defenders were doomed, one way or another.

With the second wave now reaching the beleaguered Tau and mopping up the last desperate Imperials, it seemed that the Tyranids had all the momentum. Long-ranged firepower from the Carnifexes severely damaged the Riptide battle suit. Fast-moving genestealers crashed into the Fire Warriors, slaughtering them indiscriminately. 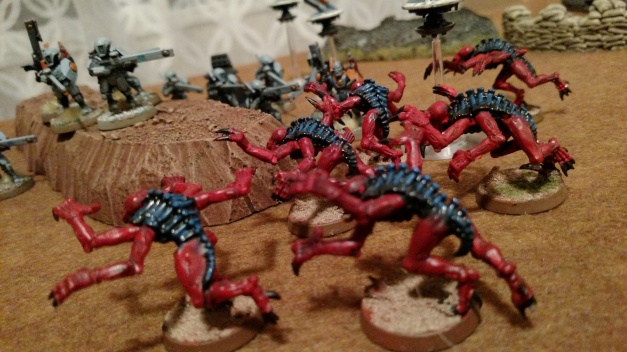 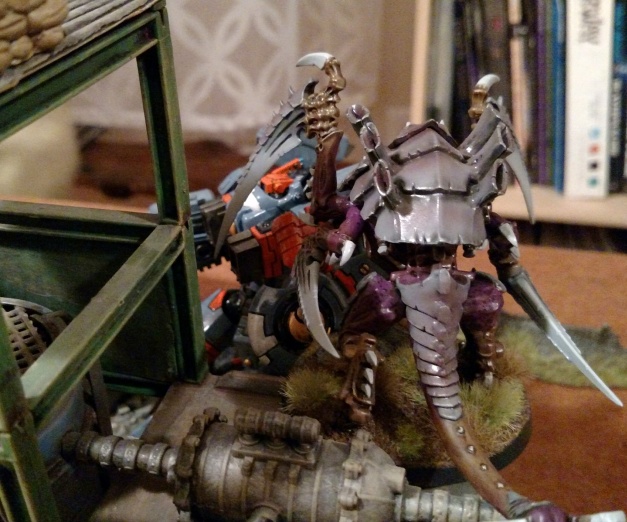 Ultimately the game ended after turn 5, and the Tau/Imperial alliance managed to hold out for a minor victory. They still had a couple cohesive units on the battlefield, even though the Tyranids were by that point rampaging through their defensive lines. Another turn or two would have probably sealed their doom.

In any event, the game narrative painted a grim picture: the Imperial garrison at Outpost Omicron had been slaughtered almost to a man. The Tau, already mauled after their encounter in the catacombs, had barely escaped the battlefield. Control of Outpost Omicron is seriously in doubt, as the retreating units sent back frantic, fragmentary reports of ramparts and barracks overrun by swarming bugs.

We’ll see what the future holds for this important strategic location on Caluphel…stay tuned!

3 comments on “40k Battle Report: Slaughter at the Omicron Barricades”