It’s time for another check-in on my project (announced in 2018, gagh!) to build an all-metal Skaven army featuring some of the vintage models that captured my imagination as a youngster.

I’m averaging about a year between updates; here’s a link to Part I and Part II. I can also happily report that, even though this army is very much a work in progress, I’m getting it onto the battlefield on a regular basis in games like Open Combat, Dragon Rampant, and most recently Saga: Age of Magic.

I’ll open with the figures that I’m the most excited about: these old-school metal Poison Wind Globadiers! 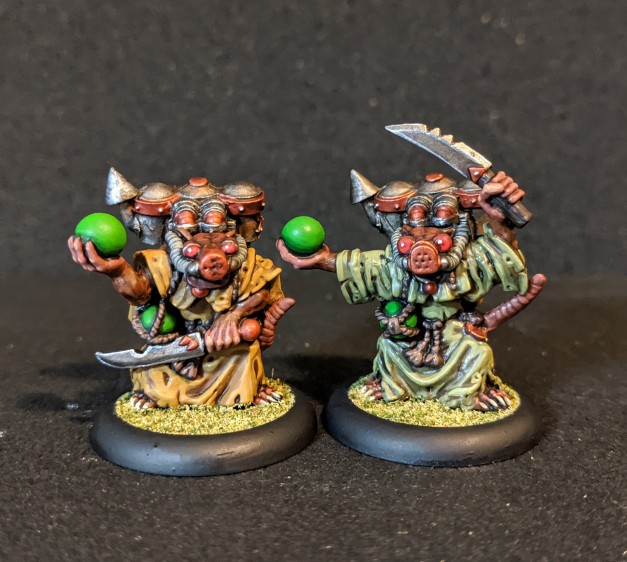 Their bases aren’t quite complete; I’ve got some tufts and clump foliage to stick on there.

I remember seeing these exact models in the pages of White Dwarf and thinking how awesome and utterly unique they were. Rats with gas masks and stink bombs! And weird, steampunk backpacks! Seeing units like this really elevated the Skaven from mere dungeon-dwelling ratmen to a zany, unique army that I wanted to collect.

As I understand it (from someone who does not play Age of Sigmar and is not up on the current range of plastic Skaven models) Poison Wind Globadiers are still playable, but have not been released in a plastic kit. So these old metal models are fairly sought after, since you need a big group to field them in Age of Sigmar. I’ll most likely run them as a two-person demolition team in Saga.

Anyway, these guys were a joy to paint, and I’ll be getting them on the table for a game of Warcry later this weekend.

In general, this army is designed to be playable in some of the “big skirmish” style games that have been released in recent years, like Saga or Dragon Rampant. Both of those games require about 40 or so models per side (a bit more if you’re aiming for a horde army, which the Skaven surely are).

Most of my recent work has focused painting stuff in small, manageable chunks. Last year I knocked out a handful of units, including this Doomwheel (rescued from the good folks at Mindtaker Miniatures). 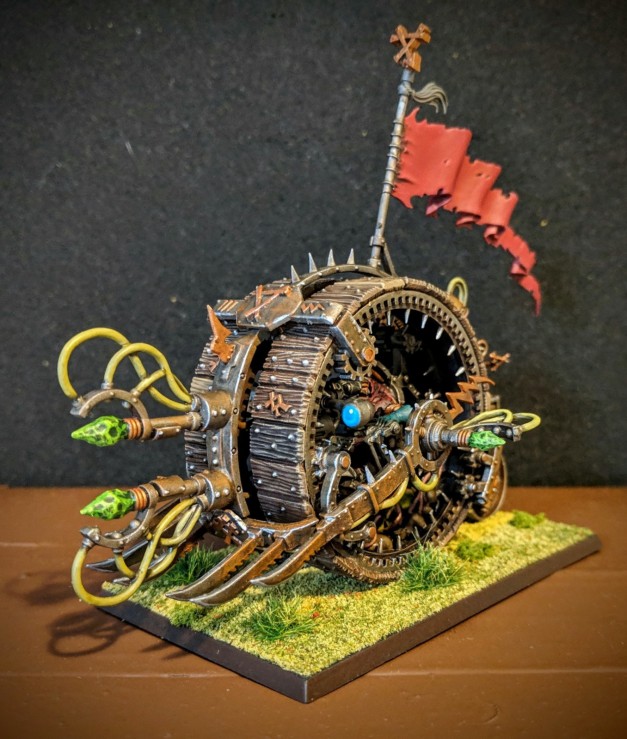 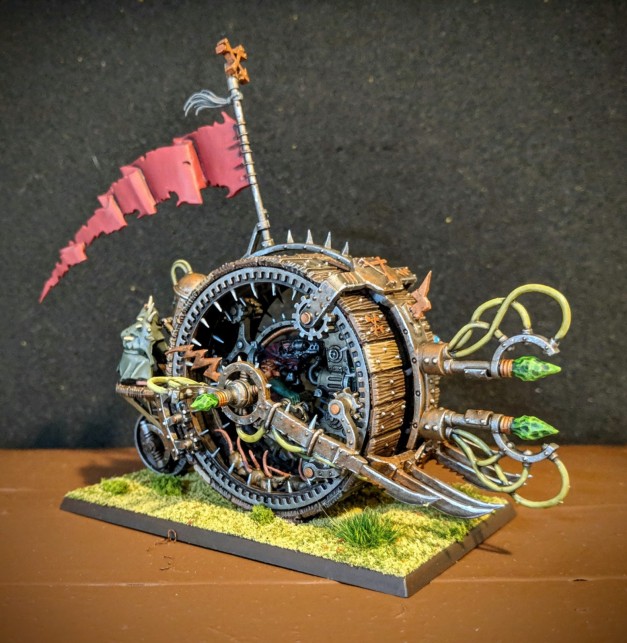 I also tackled a 12-rat unit of Skaven Slaves using some of the glorious Middlehammer sculpts that I acquired for cheap in a big bulk purchase. These figures are almost stupidly expensive if one were to chase them down as individual models. They’ll make great levies for Saga, or light foot for Dragon Rampant. 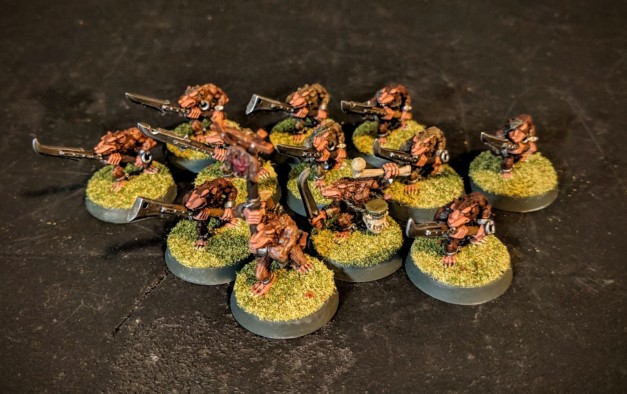 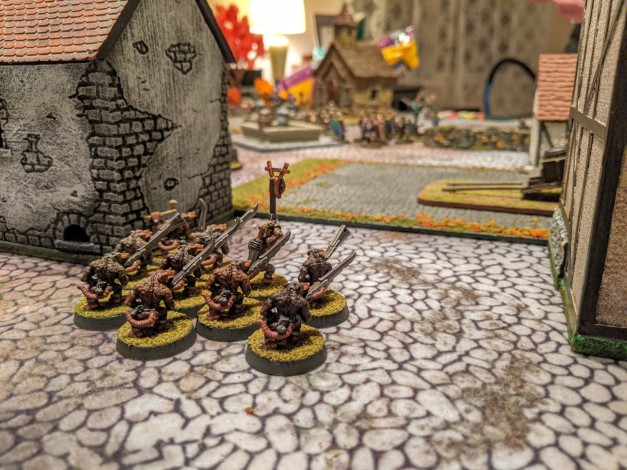 After a summer spent working on my 40k Night Lords army, I pivoted to fantasy last December and returned to this project in earnest. I had a list of units yet to paint, and near the top of the list was a unit of Gutter Runners. I’ve always loved the “cloaked assassin” look of these figures, as well as the poison dripping off some of their blades. 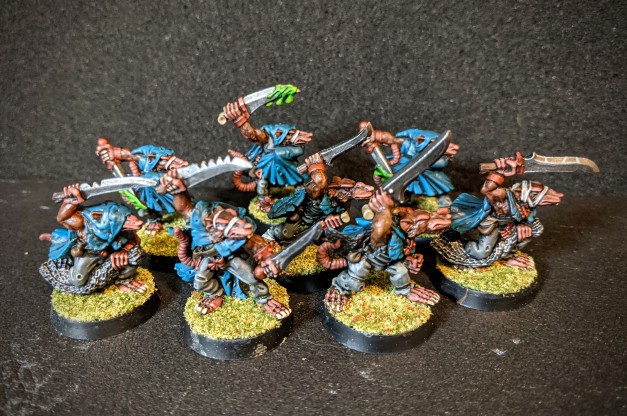 They look pretty cool in a group, too.

They can’t take to the battlefield without their leader, though. Here’s the new (still metal, though) version of Deathmaster Snikch. I acquired him gently used and missing both of his hands. That’s no problem — he got a pair of new hands, new weapons, and a new perspective on life, courtesy of some spare resin crates I had sitting around on my workbench. 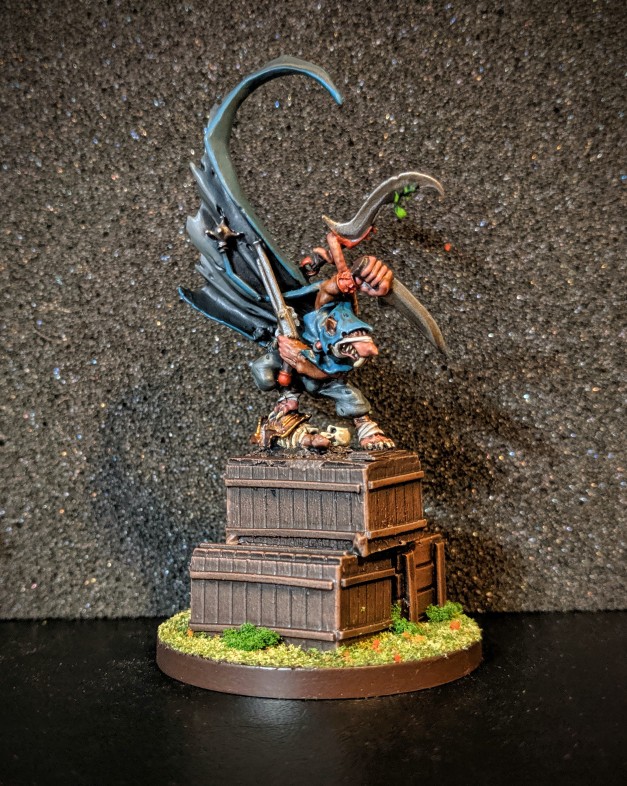 Lastly, I wanted to share a photo of this nifty vinyl banner I had custom printed for my Plague Monks by a guy on Facebook. I gave him an idea of what I was looking for and he produced the end product. I particularly like the small metal loops that fit over the figure’s banner pole! 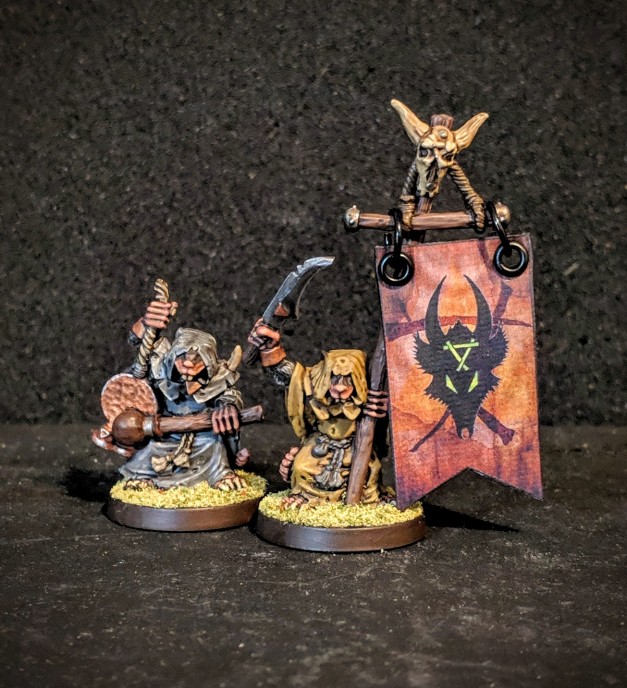 I’ve still got a few units left to go, but the end is definitely in sight for this army project. Along the way, I’ve also made a tidy chunk of cash by selling off some of the duplicate or unneeded figures that I had acquired along the way. At the very least, it’s given me a little spare funding to plow back into buying rats!