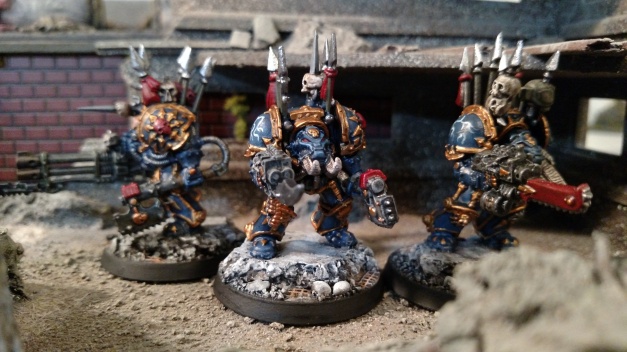 It took me the whole damn summer, but I finally finished painting up a minimum-sized unit of Chaos Space Marine Terminators for my Night Lords warband, the Reavers of Deculon Prime. What can I say, I’ve been prepping for a big Frostgrave game and otherwise preoccupied by other projects!

I showed off Durgis Varghast a few months back, but now he’s been joined by two more brutal heretics. These are all the old metal Chaos Terminators (with plastic trophy racks because I couldn’t get my hands on any metal ones) mounted on chunks of cork.

Anyway, here is Mors the Halcyon, who can recall hefting his ancient autocannon and firing upon the defenders of the Imperial Palace during the Siege of Terra. Now, after centuries of implacable bitterness, he still serves the vaunted Atramentar brotherhood (consisting of veteran Night Lords equipped with the highly revered suits of Terminator armor) and wishes only to see his former Legion returned to its former martial glory. He seeks new and unexplored worlds from which the Legion might draw new warriors. 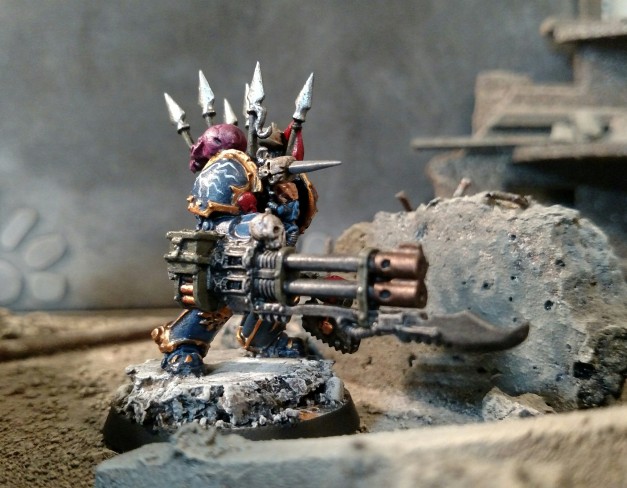 At his side is Klaudach Xar, a veteran scarred by centuries of raids, skirmishes and clashes on the fringe of Imperial space. After so many years spent far from the front lines of war, Klaudach yearns to take the fight to the Imperium once again. He has joined up with the Reavers of Deculon Prime in hopes that they will put his skills to use against the defenders of mankind. 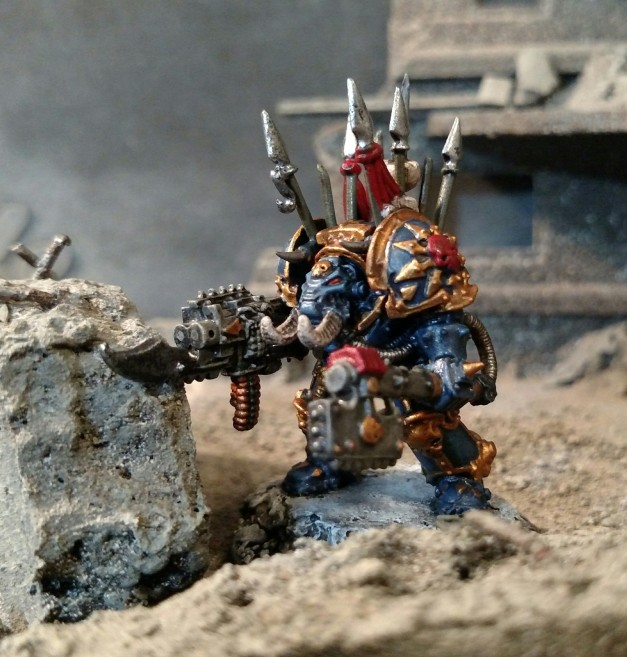 Here’s one more pic of the whole group. 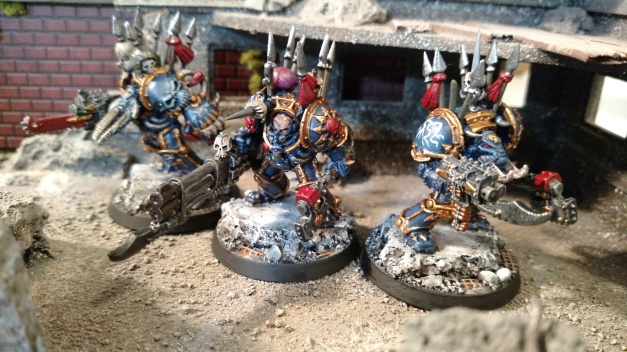 I always like coming up with name and little backstories for my guys — particularly for figures like these, which took me a long damn time to complete and are intended as sort of display pieces for my nascent Night Lords army. Let me know if you like where I’m going with this fluff!

Frostgrave: The Jewels of the Ruined City

I schlepped a couple warbands and a bunch of terrain out to Wild Things last Friday to put on a game of Frostgrave. Interest was high, and the game proved so popular that not only was I relegated to gamemaster duties (not a bad idea when trying out a new game system) but we also didn’t really need the miniatures I brought. Nice!

So there were five of us around the table, but only two of us had ever played before (me and Steve), and then only one game each. Frostgrave is a game that is heavy on flavor and narrative action, but it’s also surprisingly nuanced from a rules perspective, so I was glad to have one other player at the table who had a bit of experience.

We set up a 3×3 foot table (about what the rulebook recommends for a typical game) and the players each deployed in a corner. Although the battlefield looked small, it was absolutely crammed with terrain, and we didn’t run into any issues with the size of the table, even with four players. 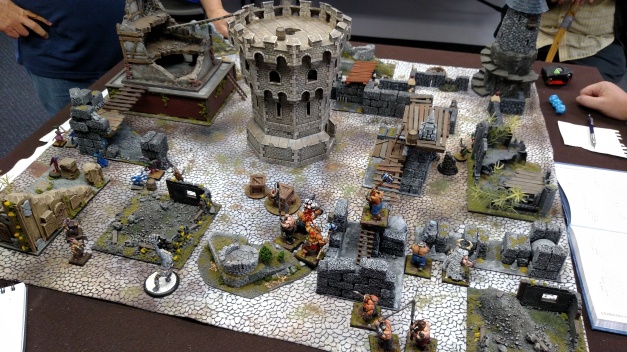 The game was chaotic and fun-filled, and I won’t attempt to produce a coherent narrative or battle report. Instead I’ll try to showcase the high points.

Vince took one of the warband rosters I’d brought along and matched it with some demons from his Mordheim warband, which was just fantastic. Here he is mobilizing his guys in a ruined area near a board edge. 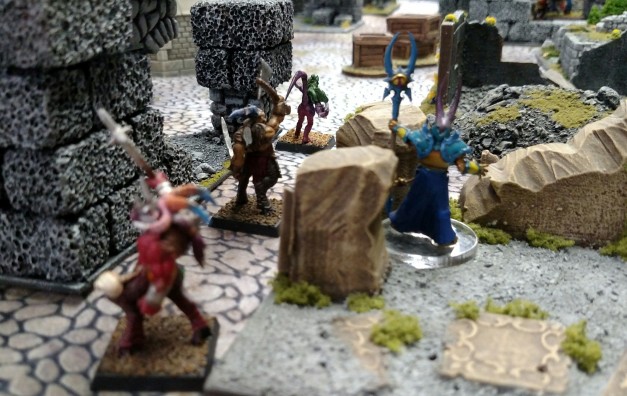 James was fielding a warband made up of ogres from his Warhammer army, and we quickly found that the larger base sizes (40mm squares, by the look of ’em) made it hard for his guys to navigate the cramped alleys of our ruined city. But he persevered and did well, securing two treasure tokens by the end of the game.

Steve had a thorough grasp of the rules and proved to be invaluable as we got into the thick of the game. His warband consisted of actual Frostgrave models (imagine that!). Here they are deploying near a small tent encampment (a nice, flavorful scenic setup, I must say).

Steve’s team was probably the most productive, collecting a treasure token early on and doing a very good job of keeping two other warbands on their heels.

Oliver was fielding one of my warbands, and it’s fair to say the dice were not with him that night. Despite a string of crummy dice rolls, he seemed to have a lot of fun and definitely got into the swing of the game as the night unfolded. Here’s his warband in action. 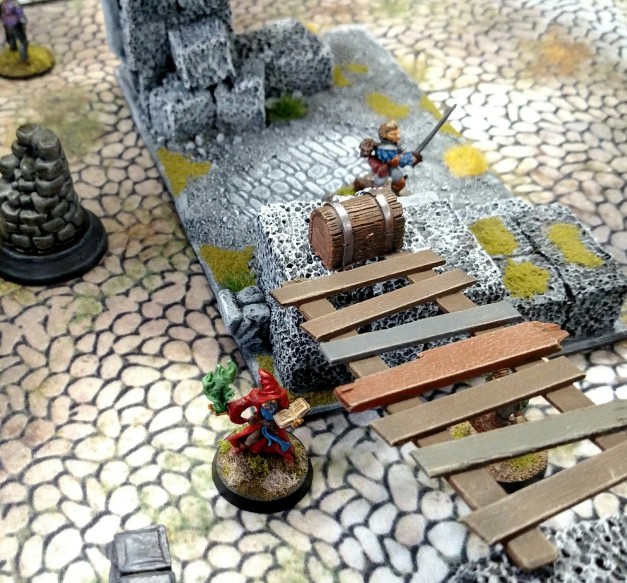 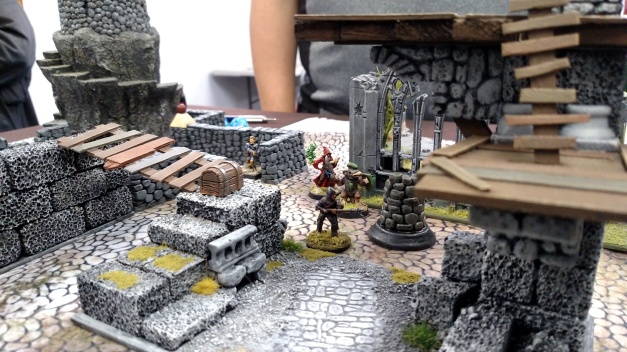 As the game unfolded, I was reminded almost every turn that Frostgrave is, at its heart, a game of movement and mobility. The movement penalties in this game are brutal and omnipresent — either you’re taking penalties for clambering over terrain, or you’re shuffling along at half speed because you’re lugging a treasure token. Frequently you’re doing both!

Unless otherwise noted, every terrain piece is assumed to be climbable, so plenty of action happens in three dimensions. In our game, we had ogres carrying treasure tokens down sheer stone walls, and wizards flinging spells while balanced precariously on the parapets of the highest tower! The movement system makes it very important to supplement your treasure seekers with magic abilities and reinforcements (in the form of more thugs) so they can survive the long, hard slog across the table to get the treasure off the board.

Anyway, here are a few more random photos from the game, showing all the little scraps and skirmishes that cropped up as the four warbands bumped into each other in the ruins. 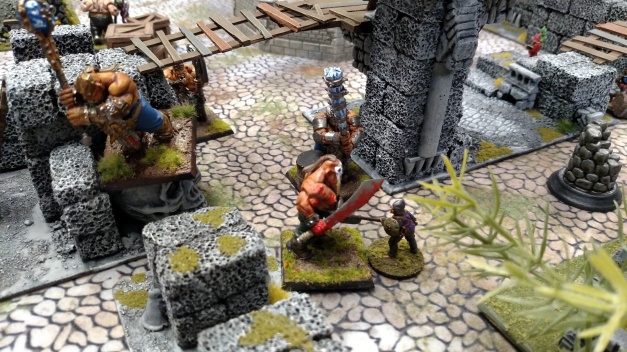 I was particularly pleased with the terrain setup. The only thing that wasn’t mine was the huge three-story resin tower in the center (which really tied the whole table together, I must say). About a quarter of these pieces were completed by me in the last month or two, once we decided to scheduled this game at the store. The walkways and ladders are also new (and as I’ve seen from browsing other battle reports, they are essential!).

Anyway, I love getting my terrain onto the table. It ain’t going to win any awards, but Frostgrave requires a fairly densely packed setup, and we were able to pull off a visually stunning table full of beautiful painted miniatures. Everybody wins!

Even though this was a one-off learning game, we still went through the post-game campaign steps so everyone could get a feel for how your warband can grow and progress. Afterward we agreed that we really needed to embark upon a campaign, so I think that’s exactly what we’re going to do. Stay tuned for more!

Frostgrave: Ignatius the Grey Monk and the Omen Hunters

Posted by Comrade on October 26, 2016
Posted in: Uncategorized. 1 Comment

I’m playing Frostgrave later this week at Wild Things Games in Salem, so here’s a look at the warband I’ll be running. It’s mostly comprised of old Citadel Skaven/Chaos Ratmen models — some of my favorite models, and the ones that I associate strongly with my earliest days of the hobby, back when I was paging through Citadel catalogs and wondering wistfully where I could get my hands on these models.

Anyway, enough nostalgia. On with the warband! Here’s Ignatius the Grey Monk, and his apprentice, Doomklaw the Prophet. Ignatius is from the Chronomancer school of wizardry in Frostgrave, and this will be the first time I’ve used that particular school, so this game should be  interesting. 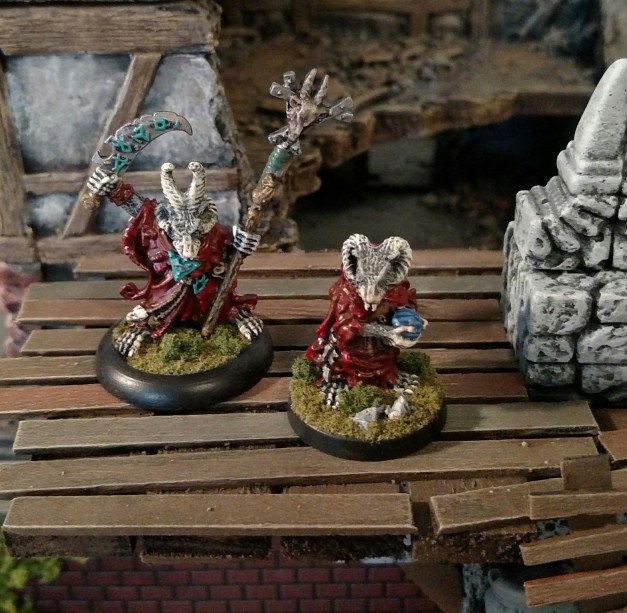 Up next we have three regular infantry rats, which will form the mobile core of my warband. They can escort the specialty figures, hold the line, or even snag some unattended treasure on their own. 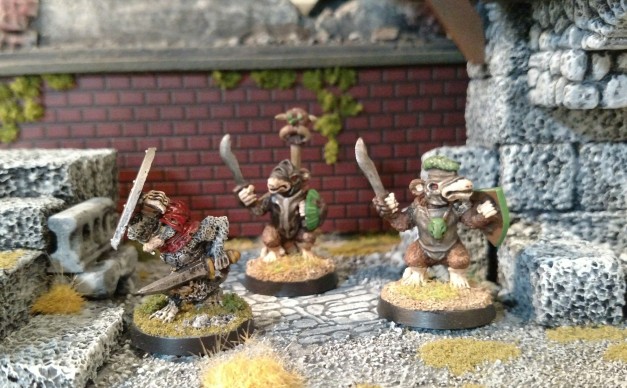 These next two figures are thief figures. In the game, thieves are inexpensive utility figures, weak in combat but faster than most other figures. 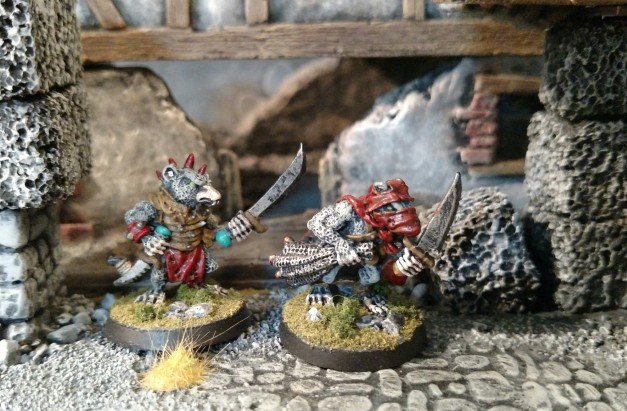 Along with the warband, you’re also getting a sneak peak at some of the new terrain I’ve built for this game. I’ll be bringing a big ol’ tub of terrain up to Wild Things and it will include some freshly made pieces.

Here is my treasure hunter and my warhound — er, war rat. The treasure hunter is another specialty figure that excels at moving around the board. The war rat can’t actually pick up treasure (obviously) but it’s great for harrying opposing figures.

And lastly, we have my lowly thug. This figure is bereft of armor, clutching only a short sword. I believe it’s a Grenadier ratman warrior. Thugs are cheap fillers in most Frostgrave warbands, and I’m expecting nothing less from this diminutive ratman.

And that’s it: Ignatius the Grey Monk and his Omen Hunters. Stay tuned for a battle report from our upcoming game of Frostgrave!