In the dusty backwaters of the Eastern Fringe, past the furthest limits of explorator listening posts and close by the enigmatic Hadex Anomaly, lies Caluphel Prime, a planet shrouded in mystery. The planet is tidally locked around its binary suns — a red dwarf and a white dwarf — resulting in a narrow habitable zone composed of wind-scoured wastes, fetid marshes and gnarled, forested uplands. Beyond this zone lie vast tracts of benighted land clad in perpetual twilight, untamed and unexplored.

Nominally categorized as a death world, Caluphel Prime actually contains the remnants of a previous failed Imperial colonization attempt. The exact circumstances behind the failure of the Caluphel colony remain unclear, but the landscape is dotted with ruined outposts, abandoned mining facilities, vacant defense stations and wrecked industrial machinery. 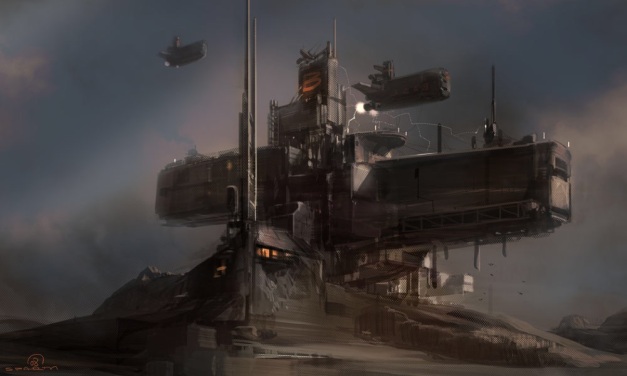 Now, though, swirling rumors of pre-Heresy artifacts and long-buried secrets are drawing explorers to Caluphel Prime once again. Imperial emissaries, foul ambassadors of Chaos, and even inscutable xenos clans are converging on the planet to probe the silent ruins and claim Caluphel Prime’s secrets for themselves.

Caluphel Prime is intended to serve as a narrative backdrop for our 40k games. The “lost world” concept can accommodate any number of game types, from small skirmishes to strange alliances to free-for-all battles featuring lots of players. The goal is to add a little narrative layer on top of our games, to give them a little character and flair. Who knows what’s out there, waiting to be discovered?

Upcoming games will explore key locations throughout the world. Some scenarios will be part of linked mini-campaigns with carry-over effects for subsequent games. Others will be one-off battles that further develop and enrich this shared setting.

In the summer of 2017 we effected a major setting update, by shifting the campaign into the new setting for Warhammer 40,000’s 8th edition. Join us as we prepare to explore the Dark Imperium…