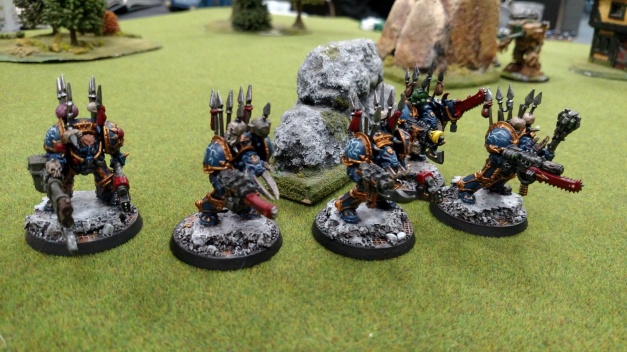 I had a chance to try out the latest iteration of Warhammer 40,000 this past weekend when Paul and I road-tripped up to Salem to grab a quick demo at Borderlands Games. Our host, Jason, did a great job — especially considering we dropped in without preamble and basically walked up to him and said “Hey man, can we get a demo?” 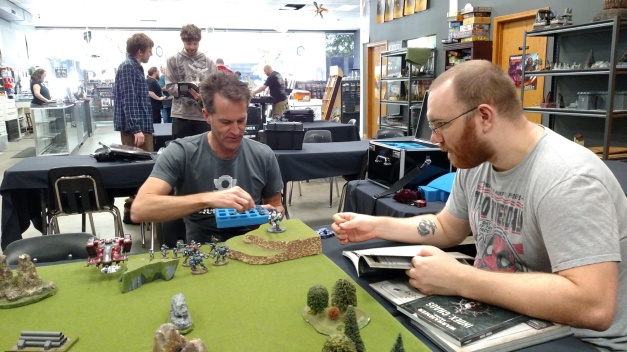 Paul and I had brought most of our existing 40k armies up to the shop, and Jason was able to organize a super brief demo game using what we had on hand.

(Sidenote: Some things never change — and in this case, it was kind of a bummer to see that Paul and I were still in the minority with our fully painted armies. There was far too much bare metal and plastic in that room.)

Anyway, the game itself seemed highly playable, with a satisfying amount of crunch, though not nearly as much as in recent editions of the game (from what I’ve heard). That’s a good thing for players like me, but I can also understand how some players might take that to mean that the game has been “dumbed down.” But I digress.

The last time I played an actual game of Warhammer 40,000 was during 3rd edition, which was the first serious reboot of the game in terms of gameplay and tone. For me, at least, Dark Imperium managed to activate plenty of muscle memory related to 3rd edition. I found myself dredging up tidbits and factoids from nearly 20 years ago, all of which contributed to me learning the game quickly and (fairly) smoothly.

It was nice to see that some of that ancient knowledge was still relevant. And the stuff that wasn’t relevant had been replaced by better mechanics and more reasonable rules. Like the to-wound roll, which used to be a giant chart/matrix thing in older editions of 40k.

Now it’s been replaced by a simple scale where you determine if your weapon’s Strength is more than/less than/double the target’s Toughness stat.

This was a little change, and it definitely involved sacrificing a sacred cow of 40k (that dang matrix), but it really improved gameplay.

Another observation is that this new edition of 40k is stuffed full of little rules and mechanics all designed to encourage armies to get in close. Many weapons are more effective at half range, which offers a tempting value proposition … do you close the distance and roll a lot more dice during your shooting phase, and risk a melee charge if the enemy unit survives?

WH40K: Dark Imperium also throws a few nods toward the game’s roots as a squad-level skirmish game (even if the current movement seems to be toward larger, company-sized games). For example, individual characters can no longer be targeted individually by ranged attacks except in a few situations, so they can safely lead from the front (where such visually impressive miniatures deserve to be, in my opinion!).

Likewise, the rules for vehicles have been simplified to the point where they play a role on the battlefield that seems more suited to a far-future sci-fi setting. They no longer have “armor facing” for the purposes of defense, and vehicles can fight in close combat (albeit with some risk).

Visually, the game itself looked fantastic. Say what you will about their rules, but GW has always had incredibly high production values on their actual merchandise. Dark Imperium featured a beautiful hardback edition of the rulebook, complete with a black ribbon in the spine for marking one’s page. Likewise, the miniatures themselves look super crisp and should be fun to paint up. I’m splitting the box set with Paul — he gets the Space Marines and I’m taking the Nurgle stuff. FWIW, I have no position whatsoever on the new Primaris Space Marines.

Anyway, this game also marked my first encounter with the “three ways to play” philosophy. For our game, we used Power ratings to build two roughly equal teams (with helpful advice from Jason). I say roughly because I’m sure we would have found some discrepancies if we had used the game’s competitive points system. But the point of Power ratings (so it seems) is to let players get to the battle fairly quickly, without complex math or spreadsheet formulas. Paul and I were both impressed with how quickly we were able to toss together two opposing armies using the Power ratings system.

In any case, our short game was a lot of fun and included a few nail-biting moments as we launched all-out attacks or attempted desperate armor saves. We departed Borderlands having gained a good starting point for a more in-depth analysis of the new Warhammer 40,000: Dark Imperium rules.

I’m not sure if this new edition of 40k will replace Grimdark Future as our go-to ruleset — I’ve said many times that Grimdark Future is basically everything I’m looking for in a game of 40k, with none of the silly baggage that seems to plague 40k these days. But we’ll give Dark Imperium an honest shot soon enough. Look for a battle report in the near future!

One comment on “Initial Thoughts on Warhammer 40,000: Dark Imperium”