Here it is. I hope you’re sitting down. Because you’re about to see the sum total of my output for Orktober. 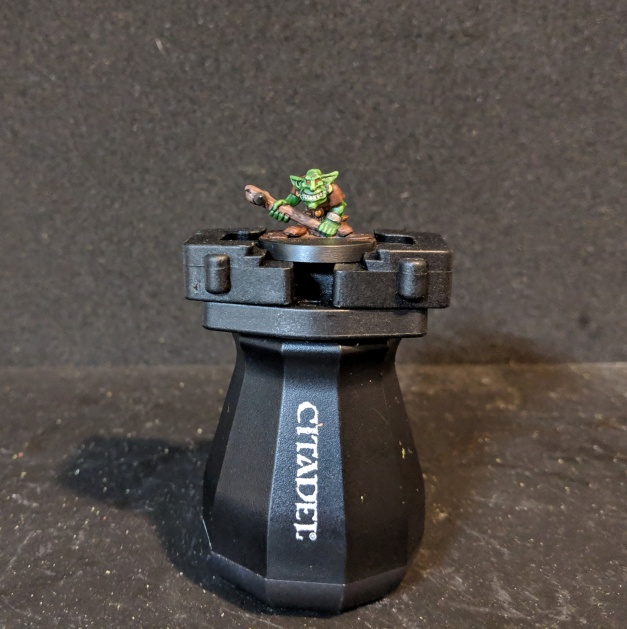 Ha! Actually, I did a little bit more, but not much. I realized on October 25 that I still hadn’t contributed anything to Orktober, despite wanting to really badly. So I rummaged around in my bits box, and the first thing I saw was this little guy.

He’s got an interesting history. Many years ago I bought a big box of random fantasy miniatures, mostly old metal Middlehammer and Oldhammer stuff. As was my wont during those glorious child-free days, I scavenged the figures I wanted to keep and then sold the rest on various forums. I think I doubled my money, which was really nice. I did this a few times per year during the height of my hobbying, pre-kids.

Anyway, as I recall, the bottom of the box was full of broken sprues, snapped off weapons and bits of metal flash (and plenty of dirt and dust). I had planned to just throw it all away, but I decided to give it one last look, just to make sure I didn’t miss anything. Well, this little guy was tucked away in the very bottom, underneath the dirt and detritus. He was so tiny I almost didn’t even notice him. I tossed him in my bits box, and there he sat, for 15 years. Until this month!

He’s cute and he’ll certainly fulfill the role of “scheming goblin” whenever the narrative scenario or RPG session calls for it. Anybody know exactly where he came from?

But anyway, I digress. After painting up this little goblin, I took a look at my box o’ random fantasy miniatures (the figures I keep handy for RPG sessions, or to introduce players to generic, non-game-specific fantasy skirmish) and realized I didn’t have any stereotypical orc models. You know — savage greenskins with brutal weapons, basic fighters to serve as foils for adventuring parties. Such figures are absolutely essential for a fantasy gaming kit like mine!

Thankfully, that was easy to remedy — I had a few mixed sprues of 40k and WHFB greenskins laying around, waiting for just such an opportunity. The two kits share a lot of pieces and are generally great fun to play around with.

So I knocked together 4 basic orc warrior type guys, then proceeded with a very fast and dirty speedpaint. I actually completed the figures on October 31, so they still count for Orktober.

These guys got a very fast speedpaint. I’m sure I could go back and tidy up the details, but honestly — they’re orcs. They’re perfectly happy to be a little rough around the edges. 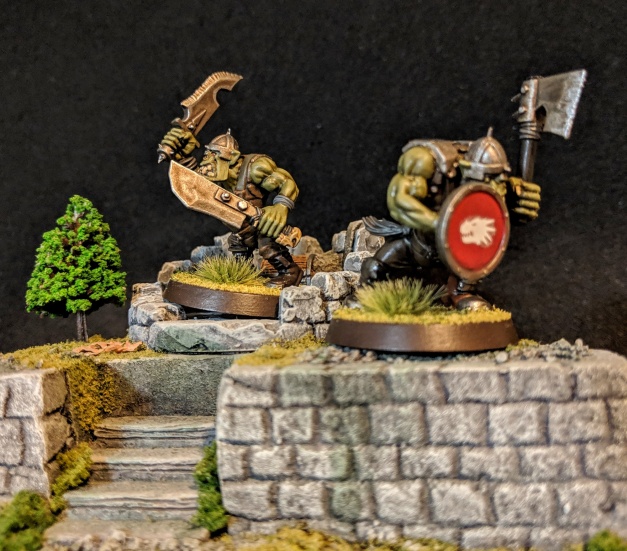 I’m pleased that I was able to sneak in a teeny tiny contribution to Orktober (particularly that little goblin, who’d been needing some paint for decades). And the best part is that I’ve got another dozen or so orcs ready to join these guys … the next time Orktober rolls around, that is.

2 comments on “Catching Up on Orktober”