With 2018 coming to a close, I’m looking back on the progress I made toward my goal (announced in August, oops!) of starting an all-metal Skaven army featuring some of the old-school figures I coveted in the pages of White Dwarf when I was a kid. 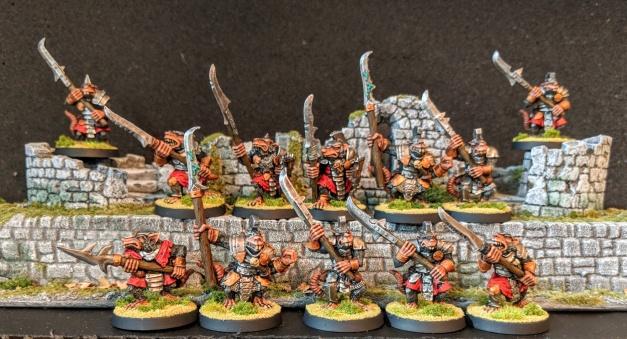 Of course, the project has caveats — namely, I was building the army for Dragon Rampant, not Warhammer Fantasy, so I could get away with a lot fewer figures, probably something on the order of 50 or 60 total dudes (instead of the 150+ models that are typical for Skaven hordes).

And today I’m announcing another caveat — one that you probably saw coming. I have decided that I will be including plastic models where appropriate, particularly for large-scale monsters or war machines.

With that, here’s a look at the progress I’ve made to date. First up, a nearly completed unit of 12 Plague Monks, featuring some of the old-school Marauder Miniatures Plague Monks and Censer Bearers. 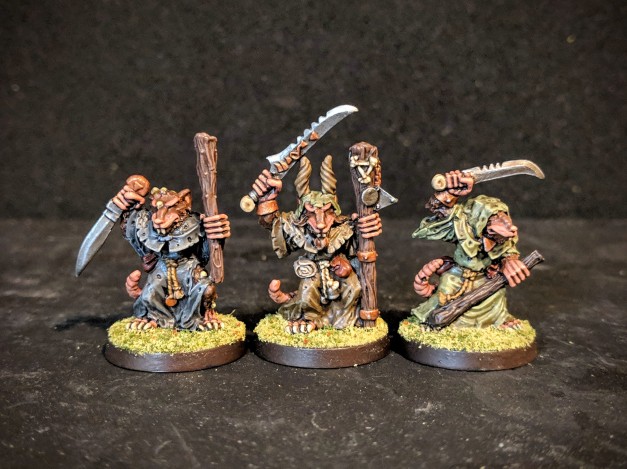 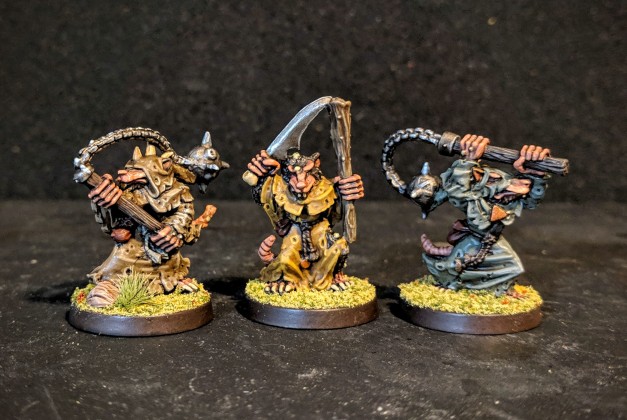 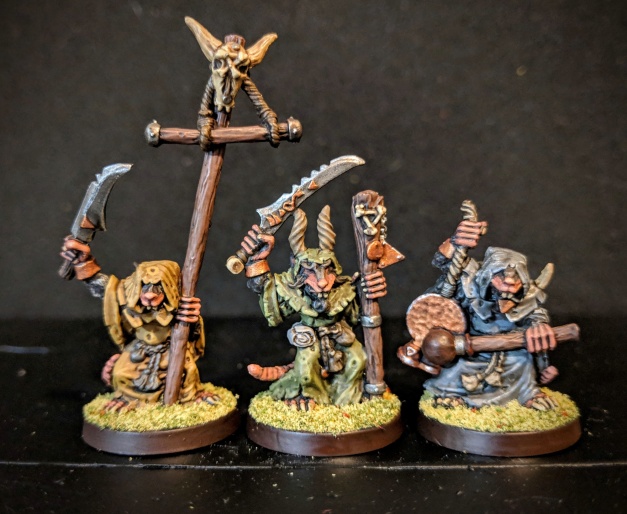 (I’ve got a custom-printed vinyl banner on the way for that standard bearer.)

I did a few basic weapon swaps and gentle arm manipulations to add some variety, but for the most part these guys are stock. I really enjoyed coming up with the drab-yet-varied colors for their cloaks and robes. I’ve got three more Plague Monks to go before this unit is complete! They’ll be represented by the Elite Foot profile in Dragon Rampant, with some special rules to model their overall nastiness on the battlefield.

Moving on, I completed a couple more character models: a warlord and a warlock engineer. Both have already seen action in the Mayhem at the Stoic Arms battle report from last month. 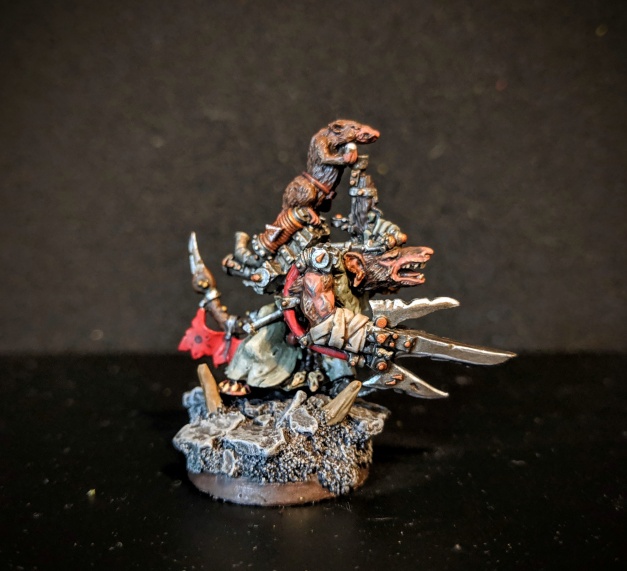 This figure is absolutely ridiculous with detail. The little rat buddy perched on his backpack is actually re-loading his warplock pistol! 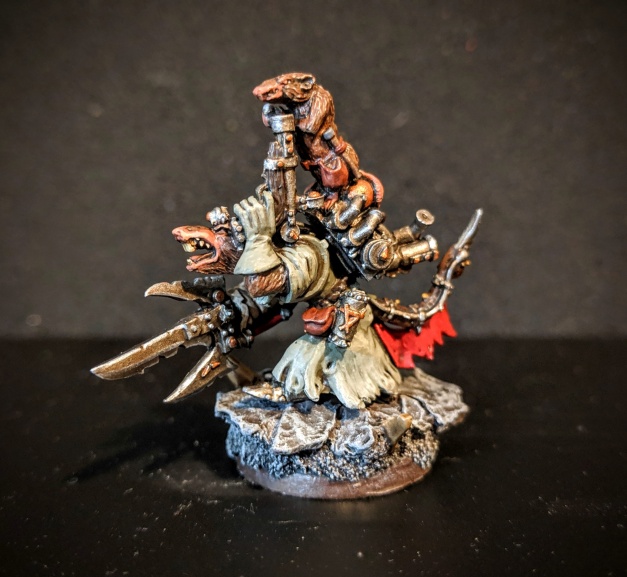 And then here’s this warlord. He was missing his rather cool tail/banner pole piece, so I had to replace it with a much less awesome tail. But he’s done, and ready for battle! 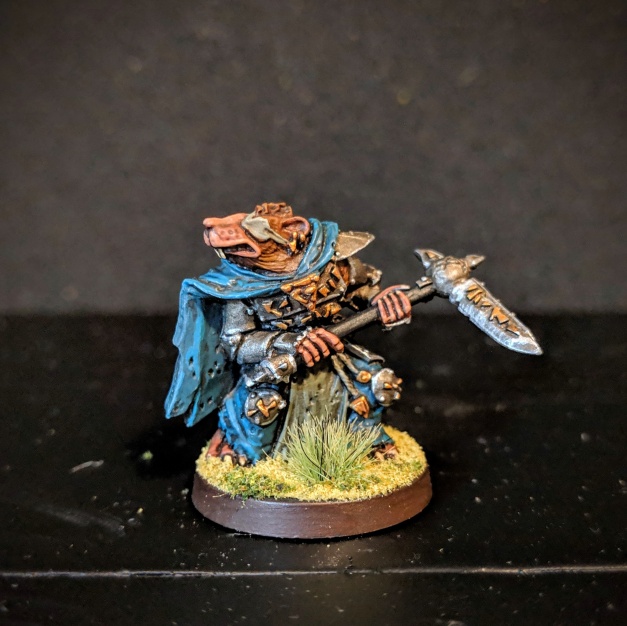 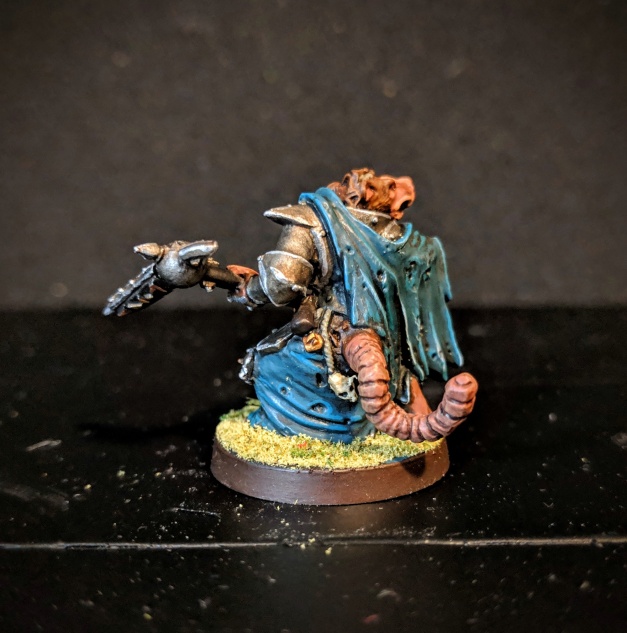 Hmmm, that blue is looking a little too electric and bright. In reality it’s rather dull, which I like. Maybe it’s the fluorescent lights in my workshop? The blue is really noticeable on this ratling gun team, which is the last of the Skaven figures I painted up this year. 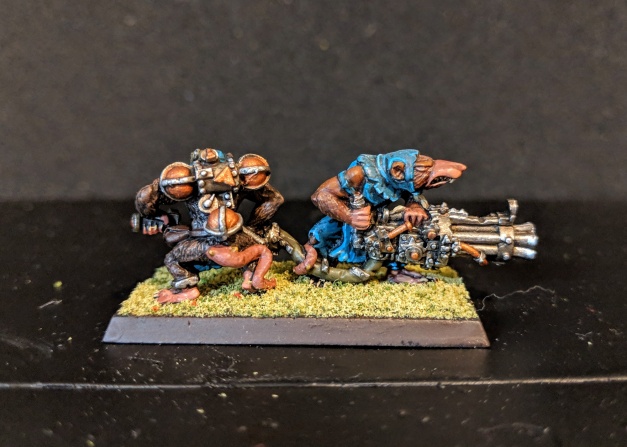 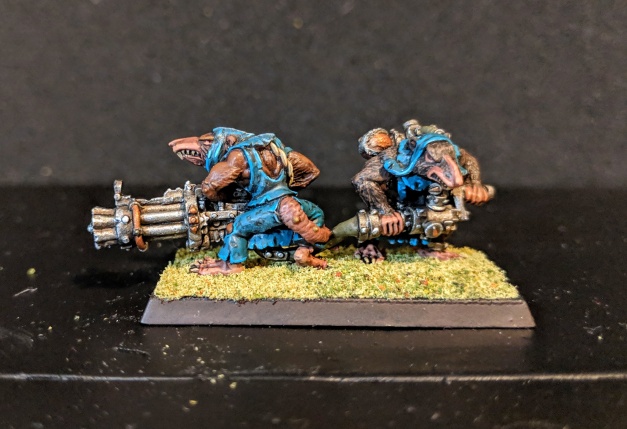 Again, the blue really isn’t that bright. It’s just the lighting. I’m actually pleased with how the blue turned out in real life, so much so that I’m going to be using it for my (eventual) unit of 12 Gutter Runners.

Anyway, that’s where I stand on this particular project as 2018 comes to a close. In addition to painting, I was very successful in acquiring a lot of the old minis I’ll need to complete this project. Ebay and Facebook are great for scooping up random lots of vintage metal Skaven! Here’s what remains on my back-of-the-napkin army list for this Skaven project:

Seems totally achievable in 2019, right? The best part about this project is that I’ve been able to use the individual models I’ve been completing throughout the year in a variety of small-scale skirmish games, such as Song of Blades & Heroes and Open Combat. Look for more of that in 2019!

This year I also knocked out quite a bit for my Death Guard 40k army, too. All in all, 2018 was a fairly productive year, particularly when you consider that my son was born in January, so I spent the entire year parenting a newborn!

And 2018 was also the year that my 3-year-old son started to become … intensely … interested in my hobby stuff. He began identifying everything on my workbench as “goblins” and quickly learned the phrase that has become his mantra of patience: “One day I’ll get to play with those!” He’s a good kid, but he’s also in that little boy phase where everything he does is inadvertently destructive. Hopefully that one day will come sooner rather than later!