One of the monthly goals for our Caluphel: Eternal War narrative campaign is to write up short backstories on three units in our armies. As I love coming up with little bits of lore to define my armies, this was an easy goal for me to tackle. It also served as an opportunity to show off some photos of my newly painted Chaos Vindicator! Without further ado…

Heaped with dry, dusty skeletons and painted with ominous bursts of lightning, the Twilight Cataclysm is an ancient Vindicator-pattern siege tank that has served the Night Lords of the Oath of Midnight warband for centuries. The tank has taken part in some of the Oath’s most infamous engagements, including the breaching of Barricade Xeros-7 in Ostfell Hive, the reduction of the encircled Salamanders’ 11th Company on Traggia Magna, and certain actions related to the cultist uprising in the Glouroth Sub-Sector that have since been purged from all Imperial records.

Simply put, the tank is a terror on the battlefield, and its presence gives the Night Lords a frightful siege weapon to break fortifications and sow misery amongst their opponents.

The tank itself has been on my workbench for the better part of two years. Like most of my 40k models, it is a rescued kit that I acquired mostly broken and disassembled in a large lot of Chaos stuff. I really enjoy the challenge of rescuing beat-up models, and this Vindicator was no difference.

It was missing the large dozer blade, which was a bummer because it’s a really cool piece that “completes” the Vindicator model, but I was determined to find a budget replacement. I tried to up the cool factor by adding a funky mechanical grabber on the side. It makes sense to me that a siege tank might have some sort of claw or manipulator to nudge rubble or wreckage out of the way as it moves through shattered war zones. Plus it looks cool!

The weapon in the pintle mount is a flamer, and to be honest I had already kitbashed the weapon before I even bothered to check if such a loadout was legal in the current edition of 40k. I am very much a “build it first, figure out the gameplay later” sort of player. Thankfully, a combi-flamer is indeed an option for a Chaos Vindicator. 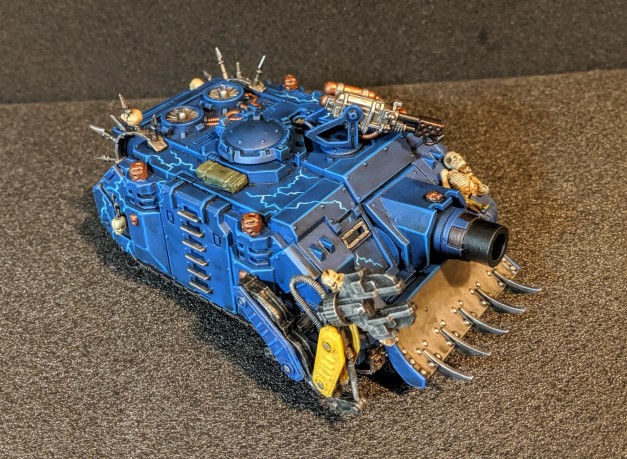 (Special thanks to Paul for giving this beauty a nice blue undercoat with his airbrush!)

The Pyre of Tears

Khorne, the Blood God, demands skulls from his followers, but many don’t know that his thirst is also slaked with the tears of his victims in the moments before they are annihilated. Thus, the Pyre of Tears pledges loyalty to Khorne while serving as frontline shock troops for the Oath of Midnight warband. They blend the savagery of Khorne with the terror tactics of the Night Lords, with devastating effects.

These guys are my Khorne Berzerkers, though you wouldn’t know it to look at them. Where is it written that Berzerkers have to be painted red, anyway? I like the idea of them retaining their Night Lords livery and interpreting the edicts of the Blood God to include terrorizing and brutalizing their enemies.

I’ve already got a sizable force of regular Chaos Marines, so I’ll be using the new, slightly beefier models to build out the Pyre of Tears and to differentiate it from the regular rank and file. This is also a fun opportunity to mix in some nifty Night Lords specific bits in my collection, as you can see in the photos here. I’ve even got an old-school Chaos Lord on a juggernaut to accompany them into battle!

The Pyre of Tears notched an early win in my game last month versus Jim, when they poured out of a Land Raider and absolutely annihilated his Baneblade in two rounds of brutal melee.

When the Oath of Midnight drifted into the Caluphel Sector, they made the controversial decision to reawaken Murdoch Dreadmantle, a fearsome champion of Chaos who had been entombed in a Dreadnought sarcophagus since the events surrounding the Feast of the Emperor’s Ascension on Gormis Minor. 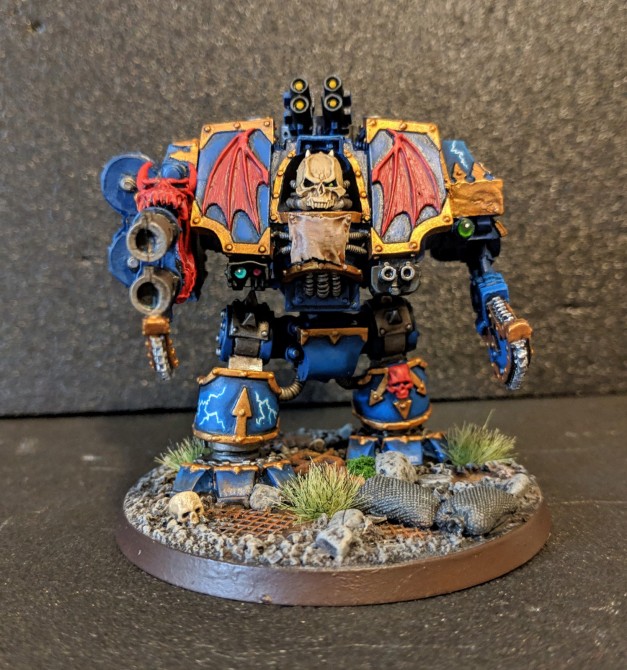 The passage through hard vacuum had brought the Astartes warrior to the brink of death, but Lord Ashmouth had decreed that Murdoch Dreadmantle should be granted the privilege of eternal entombment within one of the legion’s precious Dreadnought armored suits. Once aboard the ship, the comatose warrior was ensconced in his new exoskeleton and placed into stasis. Until now. 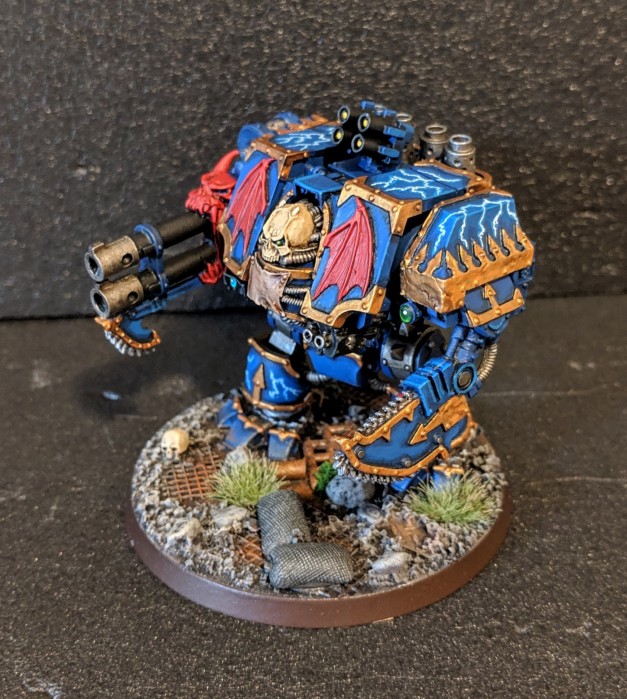 With the Caluphel Sector up for grabs like a prized goose, Murdoch Dreadmantle again takes to the battlefield with his brothers. His brush with death has given him a perspective unique to the Night Lords. His blood rage has been replaced by a chilling, implacable hunter’s instinct. He is hate incarnate — the consummate Night Lords warrior.

Alex had one last secret to unveil for this month’s campaign update. He revealed that a portion of some long-lost inter-dimensional webway existed unexplored vastness of the Caluphel Sector. What could it contain? Here are some clues…

The vista stretched out toward the horizon — a leaden sky heavy with clouds, ash underfoot, twisted trees struggling to grow. Here and there, the tumbledown ruins of some ancient monument or altar.

The broken stone blocks bore a curious sigil, and Torrigahl Bitterborne knelt in the sterile soil to examine them more closely. His ghastly clawed hands moved almost gently as he brushed aside a layer of ash, revealing a skull relief carved into the surface of the stone monument. The left side of the skull was stained black with soot, and the other half was daubed with ivory. Black and white, equally represented on the grinning visage.

Torrigahl stood. Behind him, a squad of Night Lords fanned out into the ruins, exploring the tumbledown stones, nudging aside bits of rubble with iron-shod boots. The Night Lords had been probing the mysterious webway for nearly three days, and this was the first hint they’d found in the dry, desiccated landscape.

”The two-faced god awaits,” Torrigahl rumbled, pointing to the horizon with his vermillion sword. “Our destiny lies with Malice!”