Here’s a peek at John’s faction in our Caluphel Awakenings campaign: the Juventius Free Regiment.

Rather than go with a “typical” 40k army, John has sketched out a fighting force firmly ensconced in the moral gray area of the Warhammer 40,000 universe. And we all know there’s plenty of that! After all, you can’t have grimdark without some grimgray lurking on the periphery. 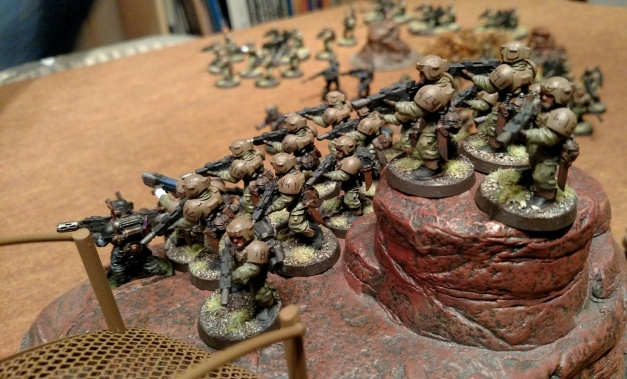 When the Great Rift opened and the Emperer’s grace fled sub-sector Juventius, Imperial Command ordered a mass exodus toward Holy Terra. The faithful obeyed, taking to their ships and entering the warp on an ill-fated retreat. No one has seen or heard from them since.

Those who declined such folly invited war from the Imperium’s zealots who remained in the Juventius sub-sector. The survivors thwarted an exterminatus attempt, and fended off rearguard attacks from the retreating faithful. Within weeks, they were alone in the sub-sector. The war galvanized those who survived into a well-organized provisional government backed by a capable fighting force of former Imperial Guardsmen. The Independent Systems of Juventius was born.

Knowing their tenuous position in the galaxy, Juventius Independent Command dispatched the Free Regiment to Caluphel sub-sector, with orders to contain and divert threats away from Juventius. Failing that, the regiment will provide early warning home, and fight delaying actions against potential invaders.

Free Regiment Command enjoys broad latitude in executing its mission, and will likely fight alongside anyone who prevents one single faction from consolidating power in the Caluphel system.

As if those problems weren’t enough, Juventius security forces must also contend with a rising counter-culture of pleasure cults that threatens to weaken the sub-sector against her enemies and further antagonize the dreaded Ordo Hereticus.

Admiral Helles commanded the battleship Indomitable, responsible for carrying out the exterminatus order when it came. Instead, she murdered the Lord Commissar aboard the Indomitable and ordered a full attack on faithful war vessels. Despite provoking a bloodbath, her decision forced the faithful to cut losses and flee the sub-sector. Helles is now an esteemed voice on the ruling council of Juventius, highly regarded with a spotless reputation. She thrives in chaos, and secretly supports the pleasure cults blossoming throughout the sub-sector. In a different universe, she would have been a dancer.

Chief Narcus Grine still considers himself faithful to the Emperor, believing that the panicked idiocy of his brethren who fled displayed the true lapse of faith. He fills his little free time with fervent study, secure in the knowledge that the path to happiness lies in the Emperor’s teachings. He suspects the influence of demons upon the wicked pleasure cults. As security chief, with access to once forbidden tracts on demonology, he has begun to learn and understand the true nature of humanity’s greatest foes. Grines will tend to take personal command of security teams dispatched to respond to any violent consequences of pleasure cultists’ debauchery.

To Colonel Adric Boden, knowledge is power. Before the faithful fled, the Emperor was the surest route to both, despite His servants’ sanctimonious hoarding of access. When the Emperor’s light darkened, Boden chose his new surest route to knowledge and power, the independent Juventius. So far, he is pleased with his decision. He commands the best fighting force available to the sub-sector, and the fate all Juventius depends on his success. Most of all, he knows that Caluphel is rife with secrets, and aches for the chance uncover and control them.