Posted by Comrade on August 22, 2018
Posted in: Posts. Leave a comment 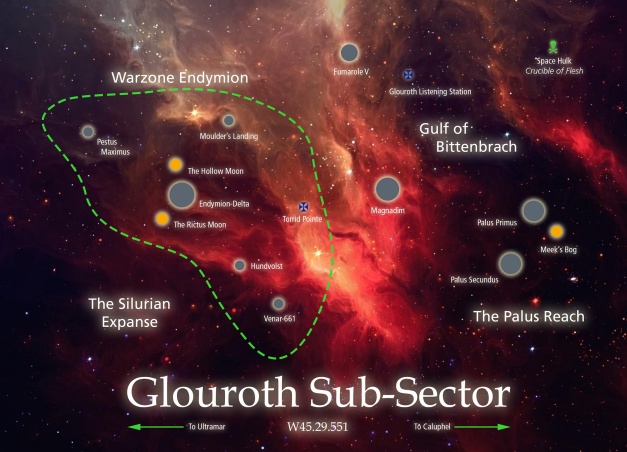 If the enemies of the Imperium could be said to have a grand plan, then the slow-moving catastrophe taking place in the Glouroth Sector is proof positive of that plan’s effectiveness. A grinding years-long invasion of the sub-sector has been accomplished by the nightmarish legions of the Maggot Magnates. Only now, as forces compete to exploit the secrets of Caluphel Prime, are the true ramifications becoming known.

The Glouroth Sub-Sector is dominated by Warzone Endymion, a horrific quagmire centered on the charnel world of Endymion-Delta. Across the half dozen worlds in Warzone Endymion, plague marines from the Maggot Magnates vectorium have entrapped an entire Imperial Guard regiment — the stalwart Magnadim 216th Shock Regiment, better known as the Ironshields of Magnadim — in a protracted war of attrition.

The Maggot Magnates‘ strategy is on obvious display here, with great hordes of plague zombies choking the cities and hives on the planet’s surface. After years of fighting, the Ironshields of Magnadim have been reduced to isolated, understrength combat forces fighting desperate defensive battles in the marshy outlands. Food, ammunition and other supplies are in desperately short supply. The Magnates’ strategy is not to defeat the Imperial Guardsmen on the field of battle, but instead to keep them locked in a costly war of attrition so that the many virulent strains and diseases carried by the forces of Nurgle can do their work.

A vast, thousand-kilometer-long scar gouges across the surface of this small moon, a legacy of centuries of careless industrial mining. Now the moon itself is wracked by earthquakes and scoured by gale-force winds — but its proximity to Endymion-Delta makes it an attractive spot for a forward operating base for the Maggot Magnates.

The Hollow Moon represents the ghastly future of The Rictus Moon. The former mining colony has been cored out like an apple and even now trembles on the verge of collapse. Raiding parties — both Imperial and Chaos alike — nonetheless brave the landslides and chem geysers in search of vital promethium deposits that have been unearthed by The Hollow Moon’s death convulsions.

This small planet is dotted with isolated settlements, many located hard against trackless forests and tundra. With only token support from the Ironshields, the hardy Imperial colonists on Moulder’s Landing have effected a surprisingly effective defense of their meager home world. After a few costly forays, the Maggot Magnates have ignored the planet for now, allowing the settlers to breath a sigh of relief in the otherwise grim environs of Warzone Endymion.

A former shrine world, its surface encrusted with monuments to the glory of the Emperor, Pestus Maximus was one of the first planets to fall in Warzone Endymion. When the forces of Chaos arrived, millions of pilgrims fled to the few star ports on the planet’s surface, hoping to find safe passage off world. What starships remained, however, were quickly pressed into service elsewhere in the Glouroth Sub-Sector, leaving the pilgrims to be summarily slaughtered by the invading Chaos army. Today the shattered statues are blackened by creeping fungus, and drenching acid rain falls across the entire planet — landing chiefly on the vast, roaming hordes of Poxwalkers, which are occasionally rounded up and shipped off world by plague marines seeking reinforcements for other battlefields.

Prior to the outbreak of war, Hundvolst had been a prime recruiting world for the Ironshields of Magnadim. Warring feudal states, operating a tech level best described as “medieval,” produced hardy warriors for the Imperium. The Maggot Magnates swept in like a storm, annihilating key population centers with a series of precise orbital drops and sending the survivors fleeing into the dark, forested hinterlands. Today, the uplands of Hundvolst are dotted with the ruins of castles and keeps, and the grim survivors have launched a doomed guerilla war against the occupiers. Rumors persist that the Hundvolst resistance is being organized and led by a shadowy Inquisitor operating toward his or her own motivations.

Nominally a dead, lightless world with no obvious value, Venar-661 commands the approach to the Silurian Expanse and thus offers a strategic observation point for fleets approaching Warzone Endymion. Both Imperial and Chaos forces have landed small vanguard detachments onto Venar-661’s craggy, cratered surface, and it is only a matter of time before war comes to this small planetoid.

Along the storm-wracked margins of Warzone Endymion, the Imperium has managed to keep one small escape corridor open. Torrid Pointe represents the only safe, navigable deep space route for refugees fleeing Warzone Endymion. A ramshackle squadron of warships from the Imperial Navy and at least one Space Marine chapter have pledged to hold Torrid Pointe for as long as possible. Meanwhile, the Maggot Magnates have recently become apprised to the location of Torrid Pointe and are mustering a strike fleet to destroy the defenders and “close the curtain” once and for all.

With the greater part of its strength trapped in Warzone Endymion, the 216th Shock Regiment finds itself hard pressed to organize a defense of its titular home world. For now, Magnadim itself — with its ash-choked skies and ferocious volcano chains — is calling up conscripts by the thousands, forcibly recruiting the hardy miners and geotechnicians that make up the planet’s workforce. Bolstering this effort are the isolated platoons and understrength companies that manage to escape the Warzone via Torrid Pointe. Magnadim’s commanders can only hope that their hasty recruitment is enough to stop the inevitable invasion that will come when Warzone Endymion finally falls.

The fifth planet in the Fumarole star system, Fumarole V is a frigid, radiation-drenched planet where indigenous life struggles to survive beyond single-called organisms floating in seas of chemical brine. The planet’s hostile environment meant that most explorator missions bypassed it in favor of other destinations, so its surface is largely unexplored and unmapped. With the outbreak of war, Imperial reconnaissance patrols, desperate for resources or strategic advantage, have uncovered evidence of crashed vessels, possibly Imperial in origin, in the shallow chemical oceans near the planet’s equator.

Installed originally to monitor the peculiar region known as the Gulf of Bittenbrach, the Glouroth Listening Station has now refocused its efforts on the inexorable advance of the space hulk Crucible of Flesh. Extremely long-range readings of the approaching space hulk suggest a massive vessel, tens of miles in length, composed of centuries of accumulated flotsam and jetsam from deep space. Historically, space hulks can often contain long-lost archeotech, so Imperial leaders in the Glouroth sector are strongly considering mounting a salvage mission.

Twin hive worlds orbiting a common yellow sun in the Palus Reach, these two planets operate massive factories staffed by millions of indentured hive workers. While initially dedicated to the production of large-scale agricultural equipment destined for off-world export, the outbreak of war has been the factories of the Palus Reach re-engineered to produce materiel for the battlefield. Even now, tanks and artillery vehicles have begun rolling off the assembly lines. The invading Chaos forces have taken note, and a spearpoint assault aimed at the heart of the Palus Reach appears imminent.