Odd and Ends: Chaos Ruins, Zombies, and the Black Knight

I spent last month and this month puttering away at a few half-finished projects. Years ago I had acquired an incomplete set of GW’s Arcane Ruins terrain kit … just the broken temple ruins, no actual base to put them on. I wanted to paint them up as a ruined temple of Malice for our Caluphel: Eternal War campaign, but I planned to leave the pieces loose and unbased so they could be more modular on the battlefield.

It’s a fun kit without a lot of the overwrought embellishment that characterizes more modern GW terrain sets, and the kit includes some truly awesome skull glyph plates. 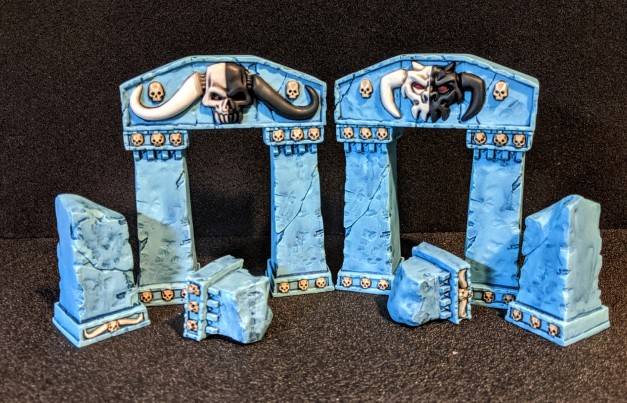 I painted the main skull designs with the two-tone, black-and-white color scheme that is associated with Malal (or Malice if you prefer) from the early days of Warhammer Fantasy. The cold blue stone pillars were inspired by an icy color palette I’ve seen on my buddy Lawrence’s Nurgle daemons.

I was really pleased with how the color scheme came out. They look quite unlike anything else in my terrain collection. These pieces will work well as creepy Chaos ruins on a variety of battlefields. Look for them to make an appearance at our 40k Apocalypse game next month!

I also filled in some gaps in my undead army following last month’s game of Saga: Age of Magic. My undead army is pretty good sized at this point, but whenever I play a new game, I find that the army requires some minor adjustment to work with various particular rules. In the case of Saga, I had a unit of 16 zombies (Mindless, in the parlance of Age of Magic) but the game’s minimum unit size is 20.

I raided my box of random undead miniatures (and they are legion, believe me) and found four suitable candidates to add to the undead ranks. They got an incredibly fast paint job — one might even call it a speedpaint — and now my unit is up to specifications for Age of Magic. 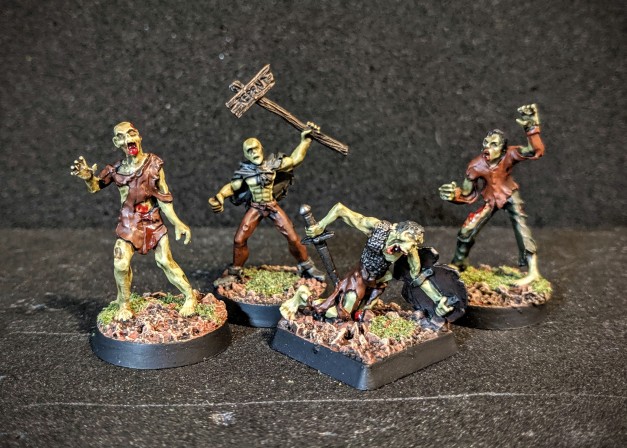 Along the way I also slapped paint on some nifty zombie dogs that I’ve had kicking around in my bits box for many years. These guys were painted with a single coat of contrast paint over a white undercoat, then I slopped a little Blood for the Blood God gloss onto their gaping wounds. The result is nothing special, but it adds even more bulk to my zombie legion in case it’s ever needed. Not bad for 20 minutes of work! 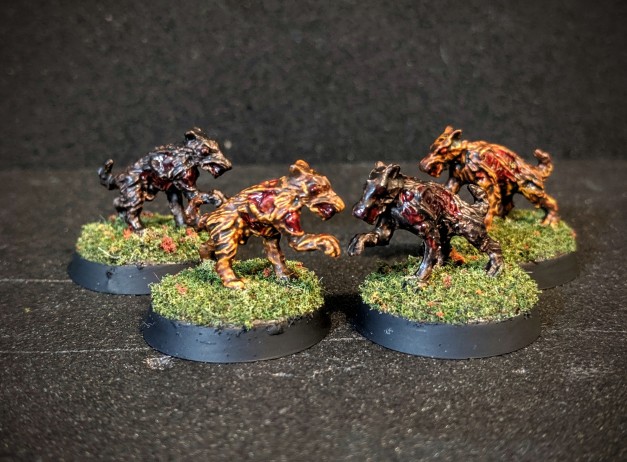 I put considerably more time and effort into this undead horseman. He will be a Black Knight for my undead army in Saga — kind of a lieutenant who will bolster the effectiveness of the undead hordes.

The figure is the Skeleton Knight from WizKids’ Deep Cut miniatures line. These figures are slightly more sturdy than the PVC Bones material, and they come pre-primed in white for ease of painting. I used the Skeleton Horde contrast paint to do the bone details, and it worked pretty well. 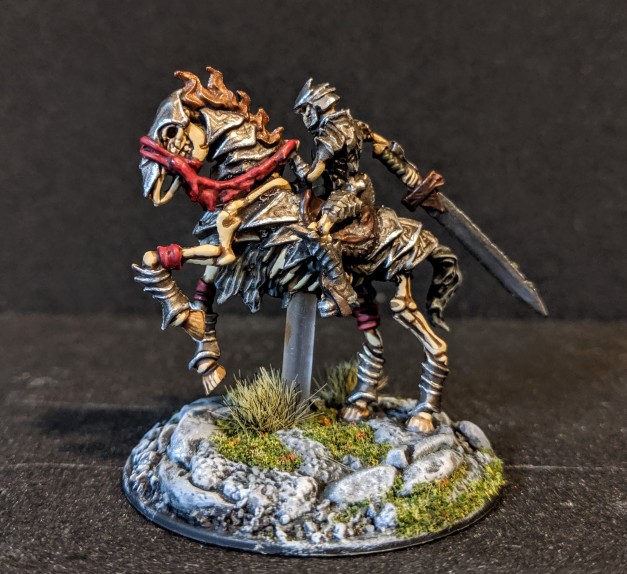 Adding new units to one of my existing fantasy armies is always fun, because I get a chance to dig through my boxes and see all the stuff I’ve accumulated over the years. My undead army is a real mishmash of figures from a variety of manufacturers and game lines, all held together by a mostly cohesive paint scheme. It’s quite big by this point, but there’s always room for more. I’m already planning out a few more units to paint up next month. More to come soon!

6 comments on “Odd and Ends: Chaos Ruins, Zombies, and the Black Knight”