With the arrival of 2020 comes a renewed focus on gaming some fantasy battles in Üthdyn, our homebrew fantasy setting. To kick-start this process, John and I got together in the waning days of December to play Saga: Age of Magic, which is quickly becoming our go-to ruleset for generic, narrative fantasy wargaming.

We set this game during The Famines, a period of Üthdyn’s history when crop failures swept the land and highwaymen and raiders preyed on the isolated settlements on the borders of Muratollnic (our Eastern Europe analog region, with lots of little feudal states jammed side-by-side in a volatile and claustrophobic relationship).

The instability caused by The Famines gave rise to opportunistic attacks by ratmen warriors that lived in the mountains surrounding Muratollnic. What began as a raid on the soggy hamlet of Glodd soon gave rise to pitched battles, as a swollen army of hungry ratmen warriors marched down from the mountains. Eventually the rats battled their way into the outskirts of Drazenko, one of many similarly sized holdings on the western borders of Muratollnic.

This battle represents a defense by Wealth Begovic, one of the most influential factions in the region, as it musters a stout militia to stand against the ratmen. We set the game in an urban area at the point where the ratmen advance reached the Begovic defenders.

OK, is that enough background for you? Sometimes I get carried away, but I really like giving a little narrative flavor to my games. Plus we’ve collectively put a lot of creativity our Üthdyn setting!

For this game, John was running his human army using the Great Kingdoms battle board, and I was fielding my Skaven ratmen using the Masters of the Underearth battle board.

We were playing the “Feasting and Pillaging” scenario from the Saga: Age of Battles book. The scenario called for three objective markers placed in a line in the center of the battlefield, equidistant from the two armies’ deployment zones. We used wooden barrels to represent the objectives, reasoning that they represented much-needed food stores that the citizens of Drazenko desperately needed to see themselves through the winter. We set up our cool toys, introduced them to each other, and got started with the battle.

I realized almost immediately that I had made a fatal flaw in my army’s design. I had gotten enamored with the variety of oddball support units available to the Masters of the Underearth, and consequentially I had forgotten to include enough core units to generate the all-important Saga dice that are used to activate units and use Saga abilities.

John was able to muster 6 Saga dice with his army, whereas I could only muster 4 Saga dice. Oops! So I was a bit hamstrung from the start.

With that said, I proceeded gamely, and actually managed a nifty maneuver on the opening turn. The Masters of the Underearth have this cool ability called Chasm that allows them to open up a rift in the earth near the opposing army. Depending on the proximity to the Chasm, nearby units might take casualties. The Chasm ability is very hard to pull off because it requires a very specific set of Saga dice results.

As luck would have it (possibly my last luck of the game?), I was able to activate Chasm on my first turn, before John had even had a chance to move! I dropped the Chasm marker (we used a jagged piece of rock ripping up through the ground) right in front of his army, in the area it was probably looking forward to moving through on his first turn.

The Chasm immediately threw John’s careful deployment into disarray. He had to basically scatter his guys to avoid falling into the gaping pit. In doing so, he lost some (but not all) of the cohesiveness and overlapping benefits of his army. Through careful maneuvering, he was able to avoid any casualties related to the Chasm.

After that, things settled down a bit. No more Chasms for me! In fact, I found myself suffering each turn due to a lack of Saga dice. This forced tough decisions about which units to activate and which units to leave stationary.

Those three barrels were calling to us, though. By moving through the buildings that lined the perimeter of the town, I was able to knock my team into a loose skirmish line as we approached the central objective. Unfortunately, John’s hearthguard (hard-hitting veterans, always good in a scrap) got there first, seizing the barrel and presenting me with a wall of spears and shields as the rats approached. 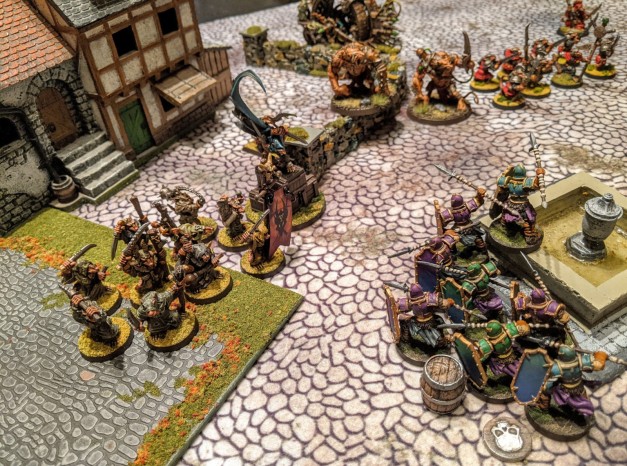 While this was happening, a lone squad of rat warriors was sneaking up to a barrel on the left flank. John had several units garrisoned in a building nearby, and they fired off some ineffectual arrows as the ratmen closed in. This was to be my only swipe at victory, as I didn’t get close enough to any of the other barrels in this game.

You can almost hear the chaotic din of the battle taking place behind these guys. Glorious!

Sidenote: We were both really pleased with how Saga handles buildings. Most skirmish and army-level games I’ve played tend to ignore buildings, or treat them as generic cover. Saga adds a few more thoughtful rules that encouraged the use of buildings, particularly moving into them and gaining some marginal benefits.

On the other flank, John’s mounted hearthguard (again, a tough nut to crack) closed in on the other barrel with frightening speed. I tried putting a ratling gun (destruction team, in the parlance of Saga: Age of Magic) in their way, and the gun caused a couple casualties, but the rats were ultimately destroyed in a stampede of hoofs and slashing swords. 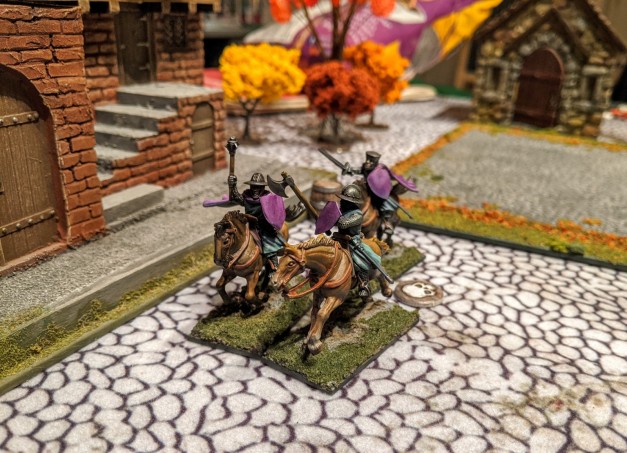 You can see the barrel just behind the surviving horsemen. Hearthguard are one of the few units in the game that continue to generate Saga dice irrespective of how many casualties they’ve taken. So while I definitely piled on the punishment against these horsemen, I wasn’t able to annihilate them entirely — and thus they continued to generate Saga dice and contribute to John’s tactical advantage over the course of the game. 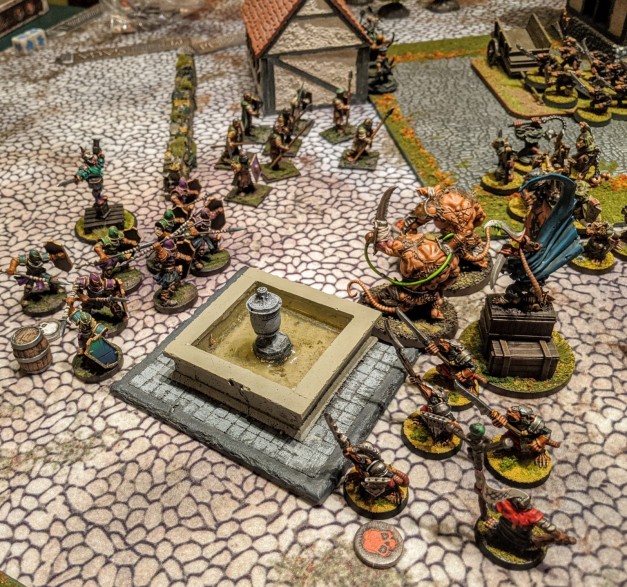 Meanwhile, the scrap in the center of the table was heating up. Once he secured the supply barrel, John began a slow retreat with his hearthguard. I tried to thwart that as best I could by charging his hearthguard repeatedly with various packs of frenzied rat creatures! 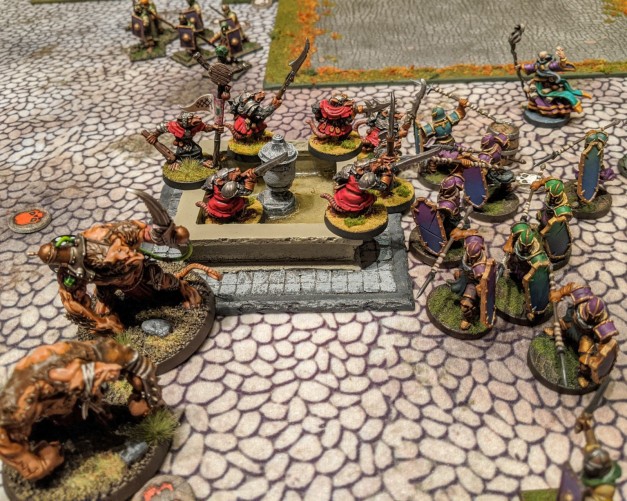 Alas, the hearthguard did what they did best, by withstanding the worst of the brutality and continuing their slow, plodding retreat. With a few more Saga dice, I think I could have hampered his strategy a bit more effectively. As it was, he had enough supporting units nearby to facilitate a tactical withdrawal even as I nipped at his heels.

One last interesting tactical situation arose as the game was nearing its final turns. Over on the right flank, John’s mounted hearthguard had succeeded in snagging the other barrel, but only after suffering some serious casualties. With just one horseman left, I realized that I had a decent chance of blasting it to pieces with my zany shooting units (including a Doomwheel and my chittering rat alchemist). Both were able to get in range in the final turn, thanks to some careful maneuvering and use of magic spells. 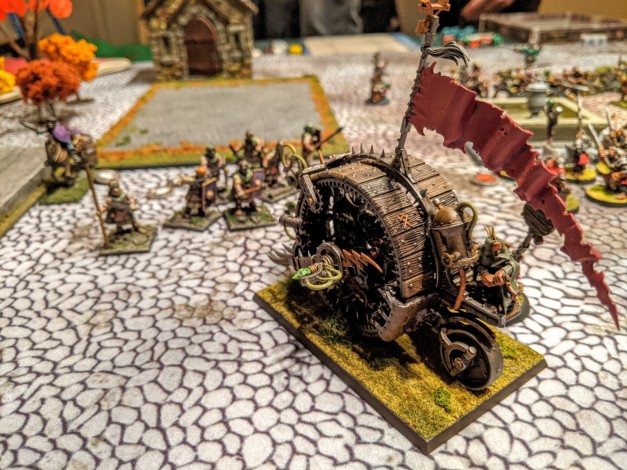 Alas, even with some nifty Saga abilities to help my shooting, the pesky hearthguard survived and retained the supply barrel. Argh! I gave it my best shot(s), but those hearthguard are just so damned … hard!

And with that, the game was over. We actually scored using both on-table objectives and “survival points” for units that survived the game. Taken together, John won handily.

I should note that my last-ditch ranged combat ploy required the use of every single Saga die that I was able to generate that turn! All of that, just for the ability to move and fire … two units. Everything else in my army was forced to remain stationary. This really drove home my comprehension of the value of Saga dice and how they are generated.

Upon review, John’s strategy of sending his hearthguard at the objectives while everything else played supporting roles turned out to be the correct play. The hearthguard were few in number, but once they got in position, they were very difficult to budge. My own Saga dice deficiency really amplified the impact of his hearthguard when I could not manage to string together a way to stop them.

Once again Saga gave us a fun and fairly well balanced game. I’m really enjoying the narrative that we’re building here, with the ratmen gnawing at the perimeter of Drazenko while the Begovic defenders seem, at least for the time being, to be able to stop their advance. Let’s see where this one goes in the future!

3 comments on “Saga: Age of Magic – Famine Grips the Land”