Ratnik and Scibor: A Few of My Favorite Dwarf Models

One of the hobby values I’ve tried to represent on Comrade’s Wargames over the years is the appeal of using whatever miniatures you want in your games. I collect and paint miniatures that are pleasing to me, first and foremost, and don’t concern myself all that much with how they’ll be used as playing pieces in specific games.

This has led me to embrace games that don’t have a proprietary set of miniatures associated with them — games like Song of Blades & Heroes, Open Combat, Dragon Rampant, Zona Alfa, Oathmark, Warlords of Erehwon, Scrappers, and Saga: Age of Magic. All of these games encourage players to explore oddball figures and game lines that juice their creativity, rather than simply painting the “correct” miniatures required to play a certain faction in a certain game.

Which brings me to this blog post, about a few of my very favorite dwarf models. For a long time, I admired these figures from afar, but in the last couple of months, as I rebooted my dwarf army for Saga: Age of Magic, I embarked on a concerted effort to track down and acquire these figures.

Ratnik Miniatures is a boutique company run by Igor Karpov. Over the last dozen or so years, Ratnik’s miniatures have been produced and distributed by Lead Adventure Miniatures through license. Ratnik’s figure lines are extensive and include the absolutely glorious Bruegelburg medieval fantasy figure collection. Ratnik is also responsible for the tremendous, super flavorful Stalker figures most recently highlighted in the pages of Zona Alfa.

But we’re here to talk about dwarves! Ratnik produces a fairly extensive line of grim, stoic, high fantasy dwarves. I splurged in May and bought six (!) of my favorite sculpts as reinforcements for my dwarf army.

The figures are everything I want from my dwarves: functional outfits and armor without a lot of overwrought embellishment, brutal weapons, and epic & dynamic poses.

Amazingly, with the exception of their shields, these are single-piece metal sculpts. They’re just astoundingly crisp and detailed. I loved painting them!

Scibor is another producer I’ve had my eye on for a long time. The company is the exclusive purview of sculptor Scibor Teleszynski, and he specializes in chunky, heavily armored dwarves. The scale of the figures creeps up to 30mm, making them quite large alongside typical Warhammer dwarf models. In terms of style, they are gorgeous…definitely a “premium” line of dwarf figures, if that makes sense.

So as I began eyeing a purchase of Scibor stuff last month, I decided that these guys would be HQ figures for my army: lords, champions, squad leaders, and hardened veterans. The size differential certainly makes sense when you consider that they would have access to the best arms and armor, as befits their status.

Anyway, I started down this path by painting up a new dwarf lord to lead my throng! Behold, King Nicodemus II, the Anvil of Dawn!

This model represents the first time I’ve used Retributor Armor paint to create a lustrous rose gold color for his armor. I’m very pleased with how it came out!

I’m also in love with his sassy pose, with that armored arm resting casually on top of his shield. He’s all like “Come at me, bro.” And let’s hear it for that chunky plinth he’s standing upon…that definitely solves the problem of “OK, which one is your leader again??”

So there you have it: a few of the my favorite dwarf models that I’ve painted up recently. More are on the way…an entire unit of Lion Guard dwarves from Scibor, plus a few interesting figures from Spellcrow. Stay tuned! 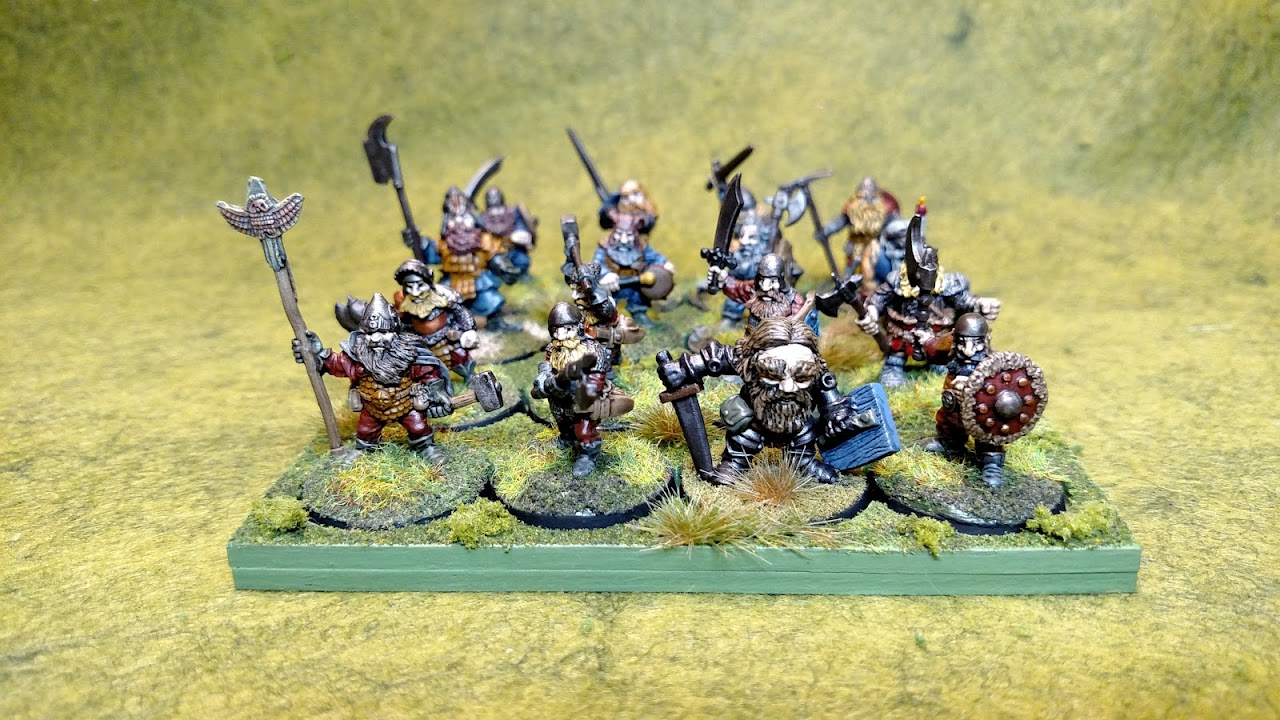