When I started my little 40k project last summer, I resolved to seek out and acquire some of the fantastic old metal figures that energized my imagination when I was younger.

At the top of the list were the old metal Plague Marines released in the mid-90s. These guys really fired my imagination — I mean, what other sci-fi milieu has evil space marines whose armor and flesh has been corrupted by centuries of sorcerous rot and demon-spawned decay? And now their pus-bloated, maggot-infested bodies are inured to pain and suffering, making them the ideal shock troops to lead an invasion on some hapless frontier colony world??

There are newer plastic Plague Marine figures out there, but I wanted the older vintage metal sculpts released in the mid-90s. So I spent the summer scouring ebay and managed to scoop up a small handful of metal figures. They were poorly painted and missing arms and weapons, so they spent some time soaking in paint stripper until I pulled them out this month for some long-awaited brushwork. Here are the first five completed figures.

The guy with the plasma gun was part of a two-pack of metal Plague Marine figures armed with special weapons. I can honestly say that I’ve never seen the figures before, so I’m guessing they’re somewhat rare.

Here’s another look at the champion. Love this figure. 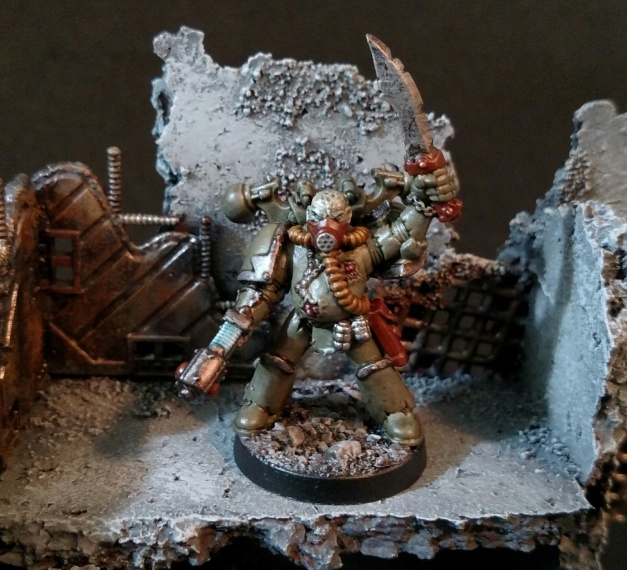 The other figure from the two-pack is the guy with the flamethrower below.

If you think the bloated, fleshy, glistening fuel tank underneath his weapon looks a lot like a gigantic diseased scrotum … well, you’re not the only one.

And lastly we have two basic Plague Marines. For years these were the stock sculpts that players would use as the starting point for their Nurgle-themed armies. I’ve seen some truly fantastic conversions using these basic troopers, but for my purposes I wanted to stick to my roots, so they got some nifty weapon upgrades, new shoulder pads, but little else.

Here’s another look at those same two troopers. 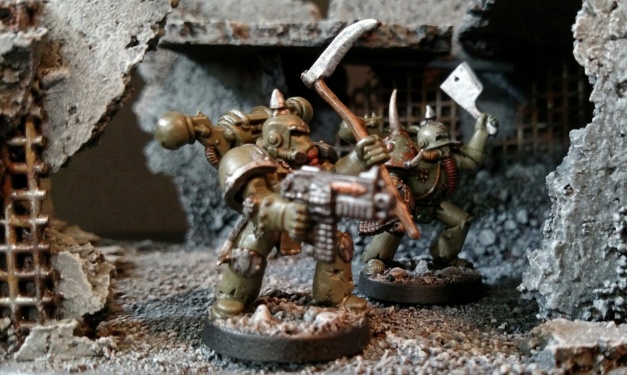 Painting these guys up was a joy. The default Death Guard color palette lends itself really well to my fast-and-dirty painting style, and the obligatory Minwax dip at the end really ties the figures together quite well. I loved the opportunity to try out different paint techniques on the various boils, sores, open wounds and odd fleshy bits on these guys.

As an added bonus, the backdrop for these photos is a small ruined terrain piece that I finished up recently. It’s just chunks of cork board along with a few plastic bits, covered in sand and gravel and given a rough and messy paint job. It came out really well I think!

I’ve got five more of these guys on my workbench, including a couple more famous sculpts, so stay tuned!