I got a much-needed hobby reprieve last weekend, when Paul and I road-tripped up to Olympia for Enfilade, the flagship convention hosted annually by the Northwest Historical Miniatures Gaming Society.

I’m not a huge historical gamer, but I am a GAMER, and that means I’ll always clear my schedule for a good convention. Back in Chicago, the big annual HMGS convention was Little Wars, and I attended that as often as I could. Enfilade had been on my radar since I moved to the Pacific Northwest a few years ago, but this was the first year that my family schedule allowed me to attend.

I played in one scheduled game (Bruce Smith’s award-winning Battle of El Obeid scenario, pictured above) and dropped in on a few more. I’ll sprinkle photos of the tabletop battlefields in throughout this article.

Enfilade was held in the Hotel RL in Olympia, located in a semi-secluded office park with plenty of parking and a view of the Puget Sound. One thing the hotel DIDN’T have was a cash machine or ATM, and this was particularly problematic because the bring-and-buy flea market was cash only. It seems like a huge oversight that the convention organizers or the hotel operators didn’t contract with a portable ATM company to drop in a kiosk for the weekend or something. They would have made hundreds of dollars in fees alone.

The convention itself had the feel of a close-knit gaming club coming together for their annual reunion. You could tell that a lot of these guys and gals had been friends for years, decades even, and Enfilade represented a great opportunity to see old friends and make new ones.

As I mentioned earlier, I had the good fortune to end up in Bruce’s Battle of El Obeid game. This was a 15mm sci-fi mashup, kind of like Weird War II meets Mars Attacks. The players were different national factions (British, Ethiopians, Germans, etc.) competing to take and hold a small settlement in the titular city of El Obeid, Sudan. Each faction had recognizable WWII units, such as infantry and tanks, but they also had a variety of alien units, plus access to weird tech to round out their forces.

Here’s a look at the battlefield a few turns into the game.

The game was run with Xenos Rampant, which is a sci-fi fan supplement inspired by the popular Dragon Rampant ruleset, along with a few modifications by Bruce (of course).

I later learned that Bruce is well known at Enfilade for hosting exciting and engaging games, so I’ll chalk it up to dumb luck that I had the presence of mind to register for the Battle of El Obeid. 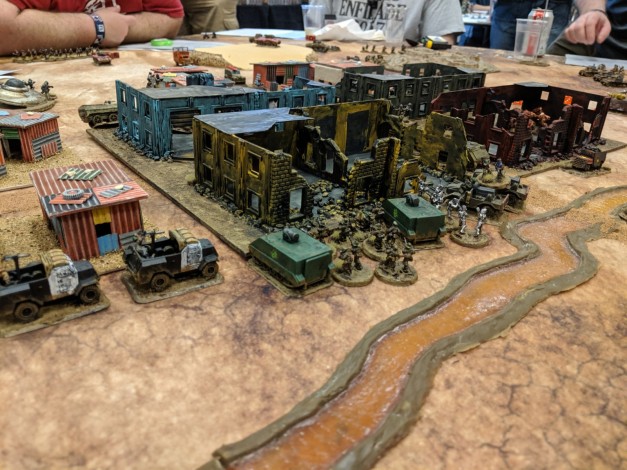 The game was great fun, with lots of nifty little details (like the alien airship that floated menacingly over the table, zapping units at random). Bruce incorporated random encounters and RPG-style elements, as players were encouraged to explore the wasteland surrounding the village to see if they could recover any lost tech or helpful resources. (Most often, though, they just found monsters. Lots and lots of monsters.) 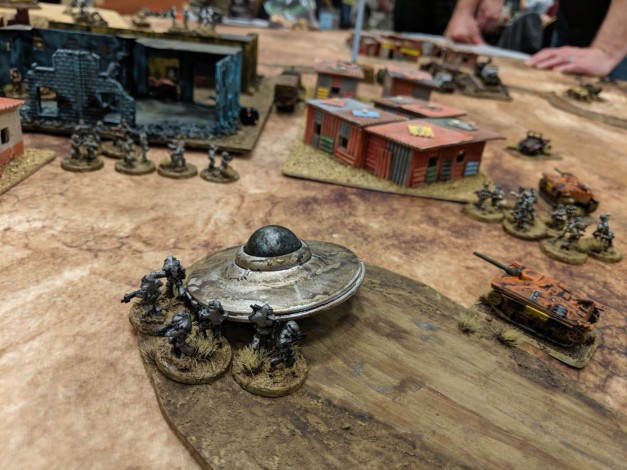 The conclusion was up in the air until the final turn of the game. The Allied powers had succeeded in seizing the center of the village, but they had done so at terrible cost, losing most of their armor and flank support in the process. We joked that the village would become our graveyard as the Axis powers closed in and eliminated us. Hah!

Thanks to Bruce for running such a fun game. I got to know a few of the other players in his local group, who either played in the game with us or drifted over to watch and offer somber assessments of the state of the battle.

Beyond that, Enfilade had many of the games I’ve come to associate with HMGS — epic Napoleonic battalion-level clashes, Revolutionary War forest skirmishes, and Zulu batttles. Peep these pics to see more of the action. 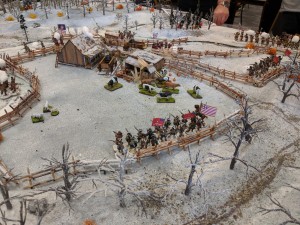 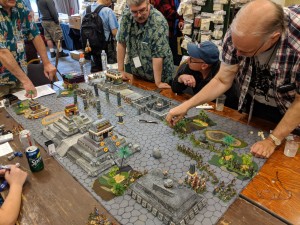 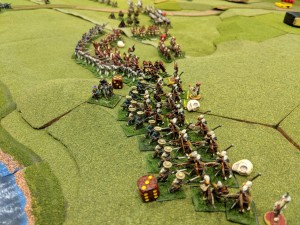 I dropped some cash on a few must-have items from the flea market. Thanks also to Mike and Rob for letting me pick over their loot to grab a few figures for my various projects.

I’ll admit that I’ve been spoiled in the past by having a plethora of great game conventions in my backyard. Back when I lived in Chicago, I had Little Wars, Adepticon, Winter Wars, and of course, the granddaddy of them all, GEN CON, all within an easy few hours’ drive. Enfilade is a solid offering and I can definitely see myself coming back next year.

In fact, Paul and I were talking on the drive home about running a game next year. We’re not big historical gamers, but it seemed there was plenty of appetite among the attendees for a sci-fi or fantasy offering. And there’s nothing like a convention game to get you motivated! Stay tuned for more.