My Take: Six Pillars of the Hobby 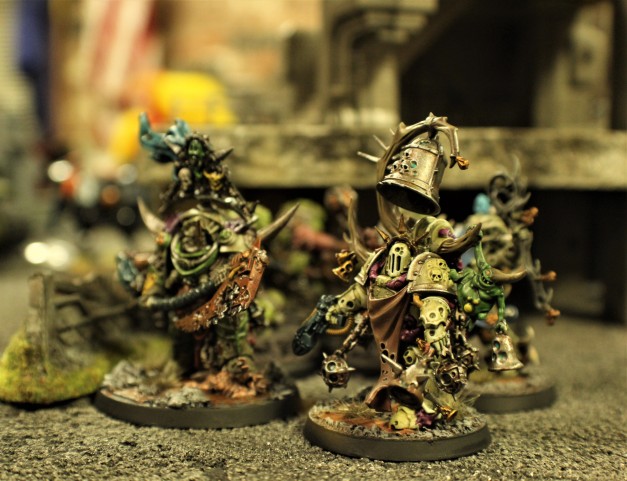 The Independent Characters podcast recently put out a buzz-worthy episode where the hosts tackled the Five (quickly amended to Six) Pillars of the Hobby. As you might imagine, these are the essential activities around which our hobby revolves. And while the Independent Characters discussed them within the confines of Warhammer 40,000 (as is their wont), the Pillars are entirely applicable to the larger wargaming hobby.

This prompted a lively email thread among the members of my local game club. We took turns ranking the Pillars according to our own personal interests and tastes. Some players preferred building models over painting them. Others prized list-building as the consummate gaming activity. I found it completely fascinating to read their thoughts on this topic.

Which brings me to my own contribution. What follows is an expanded version of the email I sent around to my game group. The Pillars are numbered in order of my own priority, with #1 being the most important to me, et cetera. Where do your Pillars rank? Be sure to leave a comment and tell me. 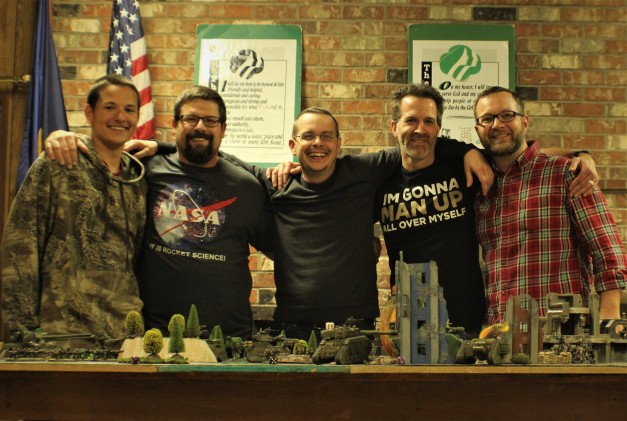 This is a social, hands-on hobby at its core, otherwise we’d just be playing video games. I think its no coincidence that most of our game nights begin with 30+ minutes of chatting and table-talk before the dice even hit the table. In fact, I observed that most of my group ranked “socializing” fairly high on our lists. This suggests to me that we should find more opportunities to hang out! Paint nights, terrain building nights, worldbuilding/lore hangouts ….. even non-gaming stuff like dinner or brews (or both).

In addition, I’ve also found that I *love* teaching new players to play various games, everything from Magic: the Gathering to Song of Blades & Heroes to Smallworld. I love running convention games, too, although I doubt I’ll do much more of that for the foreseeable future (kids and all). Gaming really is a social outlet for me and I will probably draw positive energy from it for the rest of my life.

As I get older, I derive more and more enjoyment from painting. Particularly since my job is focused on media and technology, it’s really valuable to me to have an hour or so each night to unwind, listen to some music and dab on some paint.

I’ve adopted a somewhat “punk rock” attitude toward my own painting capabilities — I feel that my painting skills have more or less plateaued, and I’m not particularly interested in learning advanced skills or techniques. I’m perfectly fine reaching the “good enough” stage and stopping there. What I may be lacking in terms of skill or technique, however, I try to make up for in sheer output. I love speedpainting and painting on a deadline (often with a game night looming). I’m doing less of that now (kids and all) but hope to return to it. But I’ve painted hundreds of miniatures (probably something on the order of 1,000 or more) over the last 10 years, which gives me a sense of deep satisfaction.

In closing: I have made peace with my boundaries as a painter and am now focused on getting toys onto the table.

What can I say — I’m a writer and I love telling stories! I’m always attracted to the lore behind any particular game system or fantasy world. Gaming in a narrative vacuum is an absolute non-starter for me. In the absence of a well defined setting or world, I’ll build one myself. I tackled this topic a little bit in my earlier post “The Games In My Head” … basically, I need something to latch onto outside of the tabletop, because gaming, for me and probably for you as well, occupies a slim minority of my actual hobby time.

In addition, I love sharing my ideas with others. Having a blog is a huge creative outlet for me in this respect. I’m always full of gratitude when anyone reads, comments or otherwise appreciates anything I share on Comrade’s Wargames.

Over the years I’ve managed to parlay my love of lore into some actual paying gigs freelancing for the game industry. In particular, I managed to fund most of my wedding about 10 years ago by editing some of the raw manuscripts from Fantasy Flight’s Dark Heresy RPG book series. That was a fun batch of work and I was pleased to play some small part in that game’s success.

I love collecting miniatures but, paradoxically, I rarely buy anything “new in the box.” More often you’ll find me scouring eBay or Facebook for gently used minis at a discount. I’m not one of those guys who has entire armies’ worth of plastic kits stacked in my closet. In fact, I’ve bought practically nothing “new” from GW since returning to 40k in 2016. The vast majority has been acquired secondhand. What does this mean? Well, namely, it means that I’ve become pretty good at stripping paint off badly painted minis!
I love the feeling that comes with rescuing a batch of badly abused miniatures, painting them up and getting them onto the table for a fraction of the cost of buying them new. In a way, I feel like Smaug the dragon, sitting on a vast treasure hoard! I’m not so good about displaying my miniatures, though…that’s an area for improvement for me, I think. I have a few curio cabinets that I need to hang up.

I like gaming, particularly on a beautiful terrain layout with fully painted armies. Back in my gaming heyday with Chicago Skirmish Wargames, I hosted game nights every two weeks in my basement, and we were constantly playtesting scenarios, collaborating on terrain projects or attending local conventions. But gaming is kind of rare for me at the moment, so it ranks a little lower on my list right now.
And while I love attending events to witness the gorgeous terrain setups and beautiful armies on display, I’m also completely disinterested in the actual competitive tournaments that tend to take place at such events. That extends over to list-building and min-max optimization … those aspects of gaming don’t hold much appeal for me.
That’s a little odd, when you consider that I enjoy Magic: the Gathering and am perfectly happy crushing someone’s dreams using little cardboard rectangles. But when it comes to the miniature battlefield, a perfect game for me involves a stunning terrain layout, beautifully painted armies, a strong narrative component with multiple paths to victory, a see-sawing battle that swings back and forth, and a narrow victory or defeat that we talk about for months to come. 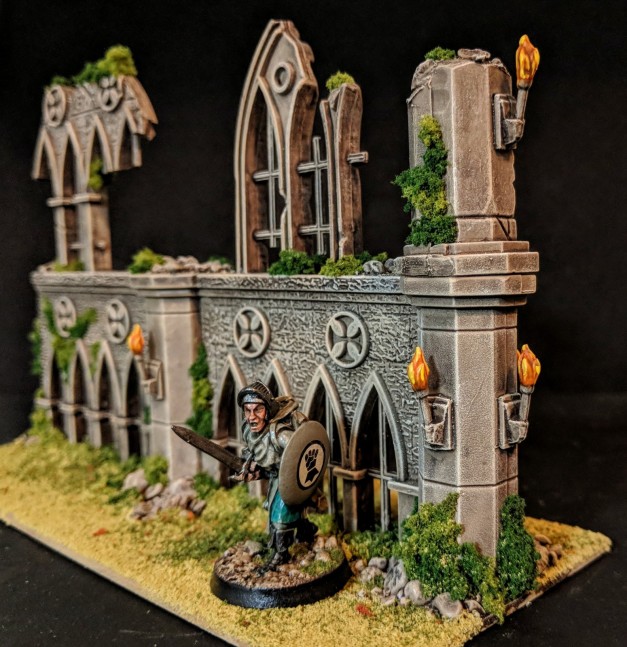 There was a time when I enjoyed assembly and conversion work, but that’s in the past, aside from basic stuff like head and weapon swaps. Nowadays I find myself paying extra to buy a kit that someone else has already assembled! Can you believe that?? I’ve got enough to do as far as painting … no interest in spending more time on assembly.
There is one caveat to this Pillar, though, and that’s terrain building. This is something that I still really enjoy and hope to do more of in the future.
In fact, terrain building was one of the original things that got me into the hobby in the first place, way back in 1996. I still remember how I glued together a few chunks of styrofoam, stuck in some pieces of paper clip to serve as rebar, and made my very first ruin. I think I finished that terrain piece before I had even finished painting my first squad of space marines.
I distinctly remember hand-lettering some graffiti on the side of the ruined wall … “DEATH TO HERETICS” was the message. Can’t go wrong with a timeless message like that!

Well, we’ve come to the end of my take on the Six Pillars of the Hobby. This was a really interesting retrospective for me, and it also helped me gain some clarity about what I like and what I want to do more of in this hobby. Be sure to leave a comment and let me know how your Pillars rank.

The Games In My Head

In particular, I’ve been thinking about one of my core gaming philosophies that’s really guided my enjoyment of the hobby over the last 20 years: the idea, despite all the games I’ve played in my long gaming career, I’ve played out at least as many battles *in my head* as I spent countless late nights seated at my workshop painting figures or building terrain.

Having a healthy, thriving headspace for wargaming is essential, because this hobby involves lots of solitary time spent painting and modeling. For me, that time represents a creative investment that pays off when the figure hits the table in a game. Because of that, the completed product is never *just* a figure. He’s a combat medic with Markham’s Thunderbolts, a renowned mercenary army, just beginning a lengthy deployment in Geirrod City in support of a major advance. 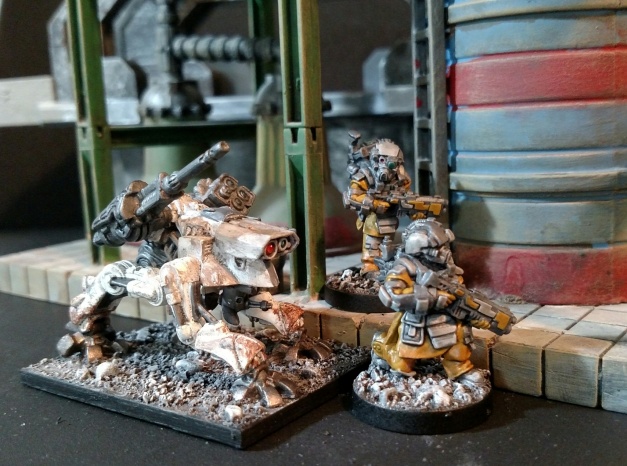 Or maybe it’s Molitor Radlec, a Lord of Chaos known to his enemies as the Eschaton of Darkness, Bane of Mortals and Wielder of the Murder Claw. Or maybe it’s Ignatius the Grey Monk, the scrappy sorcerer leading a raiding party of ratmen from the depths of the Estermark Sewers? 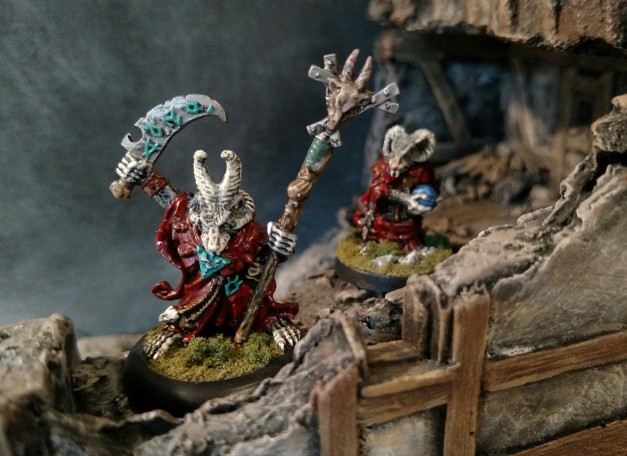 I can’t be the only one who thinks this way, right? For a hobby that is oftentimes 80% solitary time in your workshop and 20% gaming with your buddies, it’s important to find a way to stay engaged and derive satisfaction from time spent all by yourself.

For me, this goes beyond narrative gaming. Figures that have never even hit the table in a game (yet) nonetheless have lore and backstories, so that when they do take the field, they do so as heroes and legends, not merely reinforcements. This creative process helps me keep my head in the game, so to speak, when chipping away at big projects.

What do you think? Leave a comment and tell me about the epic stories that unfold in your headspace… 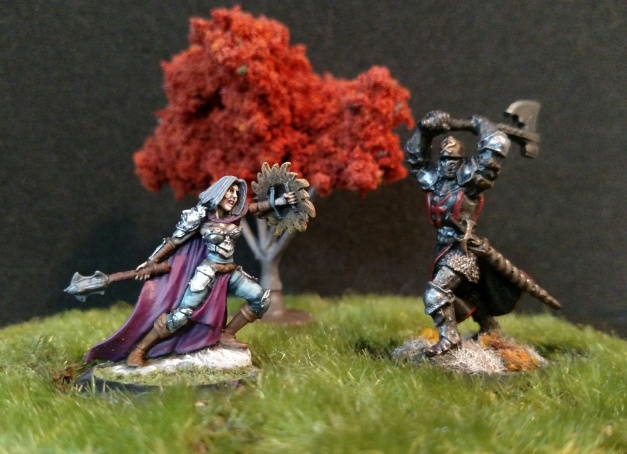 Here’s a slightly more personal project. My mother-in-law, bless her heart, has always been supportive of my miniatures hobby. She’s also always wanted a figure of her own to display on a shelf or at work. I’d always been intending to paint up a strong female warrior type to give to her as a gift. A few months ago she was diagnosed with breast cancer, so that jumpstarted this little project.

I present to you a small vignette: “Lady Victoria, Princess of the Sunrise Valley, versus Sir Murdoch, Lord of the Black Dungeon”

The figures and the tree are all magnetized so she can take the figures off for transport or display. Both are Reaper models. She’s already received the vignette in the mail and was very pleased with the whole package!

Enjoy,  Vicky — you are ten times as fierce as Lady Victoria! 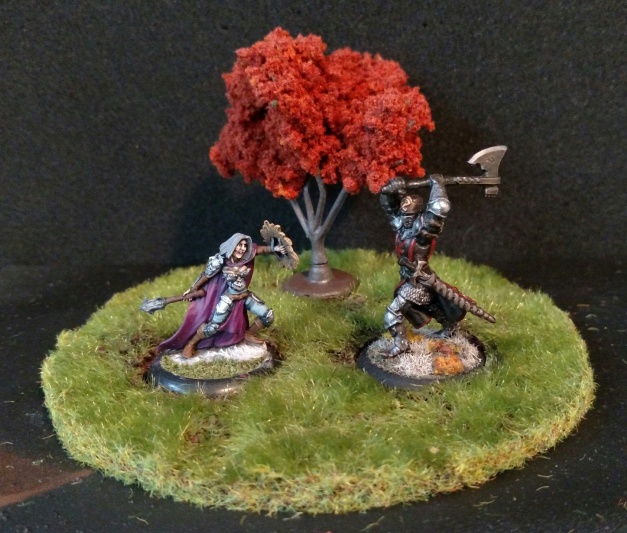